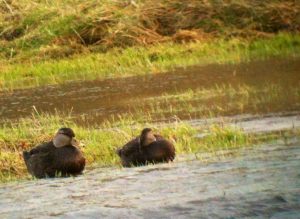 Yesterday I dropped everything and went hightailing down to Mizen Head — Ireland’s most southerly point — with a birding friend for an opportunity that was just too good to miss.

Yes, that’s right, ducks. And pretty unusual ducks at that.

While the two chaps in the photo (a very dodgy-scoped effort taken hand-holding my ancient 2MP iPhone3GS camera up to the eyepiece of the magnificent Meopta MeoStarS2 spotting scope I have on loan) may look like slightly off-colour mallards at first glance, but they’re actually American black ducks (Anas rubripes). That makes them a little bit special on this side of the “Pond”.

Amazingly this dynamic duo had turned up on a flooded field opposite a caravan park near the magnificent beach at Barleycove. It’s less than an hour from where i live, so when I got the chance for a spin out to see them, how could I refuse?

I’m not an avid “lister”, and mainly watch birds and other wildlife for the sheer joy of the experience. However, if  I was keeping a list ( 😉 ), then black duck would be an Irish tick… so hey… how could I not go?

We duly set off… said friend adopting his usual “drive like a lunatic until the bird is bagged” strategy. I stuck my head down, closed my eyes and prayed to a God I don’t believe in.

Somebody somewhere must have been listening because we made it to Barleycove in one piece. There, on the far side of a flooded expanse of field sat two black blobs. Raising the bins revealed that they were indeed the wayward yankee ducks… a stupendous “car-tick”, if you’re into that sort of thing.

They were too good to make do with a car-tick though… so we got out for a closer look through the scopes. I was kicking myself for leaving the good camera at home… but in true boy-scout fashion made the most of what was available… and as dodgy-scoped phone-camera record shots go I think the result holds its own pretty well. You can, at least, tell that they’re ducks.

It may be a while before a 600mm f4 is a viable proposition… so the digiscoping angle certainly has potential. Perhaps a series of digiscoping features here on Ireland’s Wildlife… something to ponder I guess.