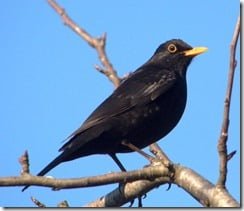 The blackbird is a ubiquitous bird of Irish parks and gardens, and is a common sight everywhere from the heart of our largest cities to the remotest rural setting. Originally a woodland bird the blackbird now exploits the wide variety of habitats presented to it by people. The species does very well on agricultural land and in urban centres, but it is suburban gardens that have allowed the blackbird to really thrive.

Blackbirds are without doubt one of our most familiar birds, with recent estimates putting the breeding population in Ireland at 1,800,000 pairs. A member of the thrush family the blackbird epitomises the typical thrush body shape. Adult birds are about 25cm (10 inches) long. The males are unmistakeable with their jet black plumage, bright yellow bill and prominent yellow circle around the eye. Females look a uniform dark brown from a distance, but a closer look will reveal a slightly lighter breast with a faint mottled pattern. Juvenile birds resemble the females but are more rufous in colour with more prominent markings on both the breast and back.

Leucism (an abnormality in the development of pigment cells) is a relatively common phenomenon in blackbirds and it’s not unusual to see male birds sporting the occasional patch of white plumage. Fully leucistic individuals are quite rare, as their striking white plumage makes them very conspicuous to their predators, but they do occasionally occur.

The blackbird’s rich, warbling song is punctuated by frequent pauses and is a familiar sound across the country from early spring onwards. Although these birds spend a good deal of their time on the ground, males tend to find a prominent vantage point like a high branch, chimney breast or television aerial before bursting into song. Blackbirds also have a very distinctive “tut-tut” alarm call that they emit either singly or as an impressively cacophonous volley when danger threatens, alerting not only other blackbirds to the potential threat, but practically everything else in the vicinity as well.

Blackbirds feed on a wide variety of foodstuffs, from seasonal berries to worms, grubs, insects and kitchen scraps. They generally forage on the ground, and are a common sight hopping across garden lawns and parkland, head cocked to one side as they eye up a potential meal. The noisy rustling of leaf litter from the base of a hedge or amongst the undergrowth during the autumn is usually a sign that blackbirds are rooting around for grubs and insects.

Male blackbirds are very territorial and defend their patch vigorously against rivals during the breeding season. When a female blackbird is at her most fertile the male never leaves her side, guarding her closely to make sure that she doesn’t mate with a rival in his absence. The breeding season starts in early spring and continues late into the summer, and a typical pair will produce two or even three broods of young in that time.

Blackbirds build their nests of twigs, leaves, grass, mud and moss in a wide range of locations including trees, hedges, thickly foliaged shrubs and occasionally in more unorthodox places such as garden sheds. A clutch of 4-5 light blue eggs with red speckles is laid and incubated for 11-17 days. Once hatched the young birds are fed by both parents and fledge after roughly two weeks. The parent birds will continue to care for their offspring until they are capable of foraging for themselves.