You are here: Home / Features / Feature Articles / Chemical Warfare in the Irish Countryside 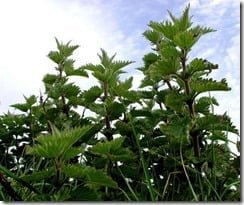 As you read this article a complex arsenal of chemical weapons is being manufactured at sites all over the island of Ireland. When deployed these chemical agents are designed to subdue, inhibit, mutilate, mutate and in some cases even kill!

The manufacturers of this nationwide chemical stockpile are of course plants. Unable to resort to the physical “fight or flight” response that’s open to most animals, when danger threatens plants have developed alternative strategies in the battle for survival.

All plants manufacture complex biochemical substances for their basic existence. They need some of theses chemicals to synthesise food, to breathe, to grow and to reproduce, but plants are also crammed with chemicals that play no discernable role in their everyday biochemistry. These “secondary” chemicals range from relatively simple poisons like oxalic acid and cyanide, to more complex molecules like glycosides, alkaloids, terpenoids, saponins, flavonoids and tannins. 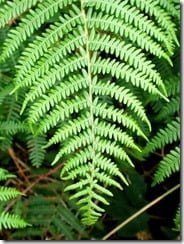 Perhaps the most obvious example of chemical weaponry employed by an Irish plant is the familiar defence of the stinging nettle (Urtica dioica). The painful sting is delivered via hollow silica hairs on the leaves. Brittle at the tip, these hairs break at the slightest touch and act like tiny hypodermic needles to deliver their payload of venom. Nettle stings were once thought to be simply formic acid, but detailed analysis has revealed that the main chemicals involved are histamine, acetylcholine, serotonin and another as yet unidentified ingredient.

While the chemical defence of the nettle is only too apparent, many of our other plants use less obvious but equally powerful chemical defences. Take bracken (Pteridium aquilinum), for example. This ubiquitous Irish fern is just brimming with noxious chemicals.

Bracken is a well adapted pioneer species, and quickly colonises any suitable patch of bare ground. Once it gains a foothold it spreads rapidly and can quickly dominate an area – a dominance backed up by an impressive chemical arsenal. Scientific studies in the USA have shown that bracken leaches chemicals into the soil that actively inhibit the germination of competing plant species, a process known as allelopathy. This effectively gives young bracken a head-start, and even if the competitors’ seeds do eventually germinate they are no match for the already well established young bracken fronds. 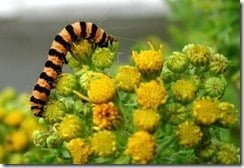 Few animals eat bracken, and with good reason. Young fronds contain high concentrations of cyanogenic glycosides, and when crushed they release highly toxic hydrogen-cyanide gas. As the fronds grow the concentration of cyanogenic compounds gradually falls off and they are replaced by bitter-tasting sesqueterpines and tannins that help to dissuade larger grazers. The fronds also contain thiaminase, an enzyme that destroys vitamin B1 and causes severe vitamin deficiency and even death in some grazing mammals. Other chemicals in the plant mimic insect moulting hormones to disrupt the development of insect pests and an array of fungicidal and antibacterial chemicals guard against infection and disease. Given this formidable array of defences it’s little wonder that bracken is so successful.

And bracken is by no means alone – plants routinely use chemicals to respond to all kinds of threats and to gain the upper hand in competition with other species. At first glance plants may seem static and defenceless, but they can actually detect attack by fungi, bacteria, viruses, herbivorous insects and grazing animals… and they fight back. When a threat is encountered the plant releases a distinctive blend of volatile chemicals from the damaged area. These act as a signal, triggering potent chemical counter-measures in the rest of the plant. The characteristic smell of newly mown grass is actually a chemical signal designed to prime the rest of the plant’s defences against attack. 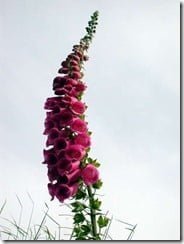 Chemical alarm signals are a widespread phenomenon in the plant kingdom, and a growing body of research shows that they also serve to alert neighbouring plants to the danger, triggering a defensive chain reaction designed to thwart the spread of pathogens and pests. Some plants can even tell the difference between being physically damaged (e.g. by trampling or cutting) and being attacked by herbivorous insects. The chemical signals released in each case are subtly different and cause markedly different responses both in the rest of the damaged plant and in neighbouring plants.

As plants have developed their array of chemical defences, so insects have evolved countermeasures that let them continue to feed on certain plants. Plants and their insect nemeses have essentially become locked in a co-evolutionary arms race: the plants generating ever more sophisticated chemical defences and the insects developing new ways to counteract them.

But even if an insect has managed to neutralise a plant’s internal defence systems it doesn’t necessarily render the plant helpless. Some plants call in reinforcements. In a subtle twist of the alarm-signal mechanism already described these plants release chemical signals that attract the natural predators of their attacker. These predators use the plant’s signals to track down their next meal and so help rid the plant of the unwelcome pest. 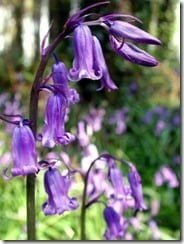 Learning more about the chemicals plants use to defend themselves has enormous potential benefits in both medicine and agriculture. Natural products, many derived from plants, account for some £9bn of annual sales in the pharmaceutical and agrochemical markets. Active substances produced by plants often have an intrinsic medical value, and examples abound of plants with medicinal properties or of medicines derived from plant extracts. Aspirin originally came from an extract of willow bark, the leaves of the foxglove (Digitalis pupurea) yielded a drug used to regulate heart rate, the cancer-fighting drug Taxol is produced by a variety of yew tree and extracts from the rosy periwinkle (Vinca rosea) help four out of every five children with leukaemia to recover. Our growing understanding of plant defences is also helping in the battle against food-crop pests, assisting in the development of more disease resistant strains and offering alternatives to our current over-dependence on environmentally damaging pesticides.

We actually know surprisingly little about the chemical make-up of our familiar native plants. Recent analysis of the bluebell (Hyacinthoides non-scripta), for example, revealed dozens of previously unknown alkaloids, unusual glucosides and a compound called DMDP – a chemical only found once before in a tropical bean from Costa Rica, where it is commercially cultivated and extracted as a pesticide.

So the next ground-breaking cancer drug or big agrochemical breakthrough could well be growing right under our noses. Meanwhile the plants of the Irish countryside continue to wage their chemical war. Enemies, beware!