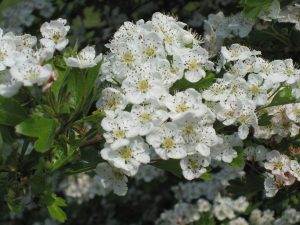 Hawthorn, also known as the whitethorn and the May tree, is one of our most common native trees, and one that is steeped in legend and folklore. It grows quickly for the first fifteen years or so of its life, and it’s thorny, gnarled branches make an ideal barrier to livestock – a characteristic that led to its widespread use as a hedging plant for centuries. Larger specimens can often be seen standing proud in the centre of hedgerows all over the Irish countryside.

Many specimens are cut back as part of the ongoing maintenance of hedgerows, although when left to its own devices the hawthorn will grow into a strong tree with a relatively stocky trunk and a large, densely leaved crown reaching an overall height of some 10-18 metres (33-59 foot). It is a deciduous tree, its leaves appearing in March and April and falling again around November. The leaves are alternate on the stems and are deeply lobed.

Copious quantities of small white flowers with a sickly-sweet scent appear on the tree from early May and endure into June. In folk-lore the flowering of the hawthorn was thought to herald the onset of summer and legend associates it with licentious pagan and medieval rites for the time of year. Hawthorn and its blossom are also at the heart of May-day traditions and the tree was used to make and decorate the original maypoles.

Fleshy fruits called haws appear on the tree in July and August and slowly ripen to a deep wine-red in autumn and early winter. They form an important food source for many of our native bird species, and the tree relies on the birds in turn to disperse its seeds widely.

For centuries haws have been used by people to produce a wide assortment of jellies, jams, wines and liquors. Legend has it that many parts of the hawthorn have medicinal and supernatural properties and herbalists regard both haws and berries as having valuable cardiac, diuretic and astringent properties. Infusions of the dried fruit are said to have a beneficial effect on the heart when taken regularly over long periods.

Hawthorn is one of the trees said to make up the “fairy tree triad” of Ireland and Britain – “Oak, Ash and Thorn” – and where all three trees occur together, according to legend, fairies can be found! Other legends associate the tree with witchcraft, and it was once believed that gnarled old hawthorn trees were really witches who had magically transformed themselves into trees.

Underneath a grey bark the wood of the hawthorn is tough and hard, and is white in colour with an occasional yellow or pink tinge. It polishes well, and was often used for fine woodwork like cabinet making as well as being widely used for making walking sticks, tool handles, engraving and all forms of turning.

Hawthorns grow on a wide variety of soil types and tolerate a wide range of conditions. Because it grows quickly it often protects the seedlings of other, slower growing native trees, particularly oak, and so aids natural regeneration. It is a very important species for wildlife – as well as relying on the tree’s fruit as a source of autumn food many bird species favour the dense thorny crown of the hawthorn as a location for their nests, and the bark, branches, leaves and flowers offer refuge to many species of invertebrate. The fact that it is widespread in hedges means that hawthorn also plays an important role in supporting the many species that live in and around Irish hedgerows.

Photo Credit: Hawthorn flowering on Duncan Down” by Prl42 – Own work. Licensed under CC BY-SA 3.0 via Wikimedia Commons.