You are here: Home / Archives for cetaceans 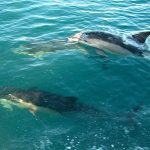 A small group of three common dolphins surprised shoppers yesterday lunchtime when they turned up in the heart of Cork City. The trio made their way through Cork Harbour and up the River Lee’s South Channel in front of the newly constructed Cork School of Music. "It's certainly an unusual occurrence but it is not without precedent," said Pádraig Whooley of the Irish … END_OF_DOCUMENT_TOKEN_TO_BE_REPLACED 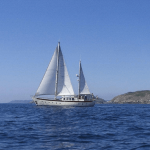 The Irish Whale and Dolphin Group (IWDG) has confirmed on its website that it will accept the 17 metre steel-hulled yacht, Celtic Mist, as a gift from the Haughey family. IWDG coordinator Dr Simon Berrow said that the group had to weigh up the offer carefully to make sure it was a viable proposition before deciding to accept. “It was a very generous offer from the Haughey … END_OF_DOCUMENT_TOKEN_TO_BE_REPLACED 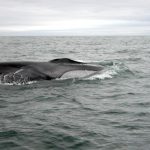 An account of my first ever encounter with fin and humpback whales off the coast of West Cork, Ireland in November 2004, This article appeared in the UK magazine The Countryman [CJ]A giant head broke the surface and a plume of spray erupted seven metres into the air. The head was followed by the graceful arch of an enormous back and, several seconds later, by a small curved … END_OF_DOCUMENT_TOKEN_TO_BE_REPLACED