You are here: Home / Archives for Golden Eagle Trust 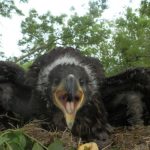 The Irish white-tailed eagle reintroduction project has received a much-needed boost with news that five pairs, spanning four Irish counties, now have chicks in the nest. According to a press release issued by the Golden Eagle Trust, of the eight pairs that attempted to breed this year, eagle chicks have now hatched at sites in Glengarriff, West Cork; two sites in Co. Kerry; … END_OF_DOCUMENT_TOKEN_TO_BE_REPLACED 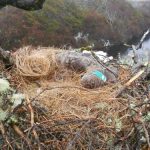 A female white-tailed eagle was found dead at a nest site in Connemara earlier this month by National Parks and Wildlife Service Conservation Ranger Dermot Breen.Mr Breen found the six-year-old female dead on the nest on 01 April, and a post-mortem later confirmed poisoning as the cause of death -- the 13th confirmed poisoning fatality since the white-tailed … END_OF_DOCUMENT_TOKEN_TO_BE_REPLACED 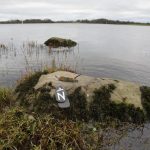 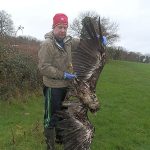 One of the first two white-tailed eagles to hatch in Ireland in more than a century has been found shot dead in Co. Tipperary.The male bird was one of two chicks reared successfully by a pair of re-introduced eagles at a nest site on Lough Derg near Mountshannon in Co. Clare last summer. It was discovered on land near Ballinderry, North Tipperary by a National Parks and … END_OF_DOCUMENT_TOKEN_TO_BE_REPLACED 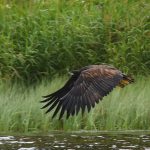 Irish born white-tailed eagles are on the wing again for the first time in more than a century.A pair of reintroduced adult eagles successfully reared two chicks at a nest site on Lough Derg, near Mountshannon, Co. Clare. Both chicks fledged successfully last week in what is a momentous milestone for the high profile white-tailed eagle reintroduction programme, which began … END_OF_DOCUMENT_TOKEN_TO_BE_REPLACED