You are here: Home / Archives for killer whale 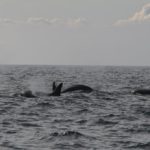 The Irish Whale and Dolphin Group (IWDG) has expressed concern that Ireland's only resident group of killer whales (Orcinus orca) could be dying out due to the long term effects of marine pollution.Known as the Scottish west coast community group, the killer whale pod is the only known resident pod of this apex marine predator around Britain and Ireland. The group is … END_OF_DOCUMENT_TOKEN_TO_BE_REPLACED