You are here: Home / Archives for new species 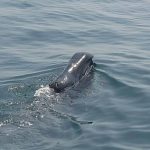 The Irish Whale and Dolphin group (IWDG) has confirmed that an unidentified whale seen and photographed by the crew of a pilot vessel at the mouth of Carlingford Lough yesterday is a young bowhead whale (Balaena mysticetus).This Arctic whale species has never been recorded before in Irish water, and fittingly becomes the 25th whale and dolphin species on the Irish list on … END_OF_DOCUMENT_TOKEN_TO_BE_REPLACED 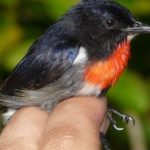 A team of scientists from Trinity College Dublin has discovered a new bird species on the Tukangbesi Islands off the coast of Sulawesi in Indonesian.Dubbed the Wakatobi Flowerpecker (Wakatobi is an acronym derived from the names of the four main islands in the Tukangbesi chain, Wangi-wangi, Kaledupa, Tomia and Binongko) the Irish scientist demonstrated that the bird … END_OF_DOCUMENT_TOKEN_TO_BE_REPLACED 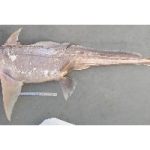 A new species of fish has been discovered in the waters off Ireland’s West Coast. The fish, a species of chimaera (ancient relatives of sharks), was discovered when 31 specimens were spotted in a French fish market after being landed by a trawler that had been fishing in the North East Atlantic off the coast of Ireland. The new species, called the opal ghostshark (Chimaera … END_OF_DOCUMENT_TOKEN_TO_BE_REPLACED