You are here: Home / Archives for peregrine falcon 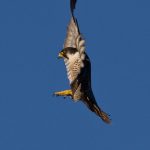 The peregrine falcon is undoubtedly one of Ireland’s most impressive birds. A large, powerful falcon it is considered by many to be the ultimate bird-of-prey, diving in a spectacular, vertical stoop to strike its quarry – other birds – in mid air. The peregrine is thought to reach speeds of up to 180 mph as it plummets earthward, though it usually levels off slightly and slows … END_OF_DOCUMENT_TOKEN_TO_BE_REPLACED 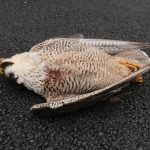 Peregrine falcons nesting in south Tipperary have been deliberately shot in a spate of attacks over recent weeks according to a report from Bridwatch Ireland.The birds, two of which died and one which sustained permanent injury, are believed to have been shot in three separate incidents.The body of an adult female (pictured) was found by bird of prey expert Kevin … END_OF_DOCUMENT_TOKEN_TO_BE_REPLACED

Check out this AMAZING Peregrine Falcon photograph posted to the Ireland's Wildlife group on Flickr by Neil O'Reilly. A more than worthy shot to kick off our regular Wednesday "Wildlife Photograph of the Week" slot.Photograph  All rights reserved by Neil O'ReillyIf you'd like to see one of your photographs featured in our "Photo of the Week" slot simply add your … END_OF_DOCUMENT_TOKEN_TO_BE_REPLACED 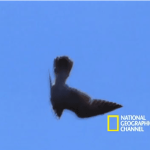 OK – so we all know that peregrine falcons are awesome predators, and that in a stoop they are the fastest living thing on earth. But just how fast is fast… and what exactly does a stooping peregrine look like up close and personal, in slow motion? One US scientist took a novel approach to finding out. He jumped out of a plane and went into freefall with a lure and a trained … END_OF_DOCUMENT_TOKEN_TO_BE_REPLACED

I just spotted this shared on the Birdwatch Ireland page on Facebook, and thought that I simply had to share it here. Flocking starlings are amazing enough… but flocking starlings reacting to a peregrine falcon attack… wow! If you don’t already, don’t forget to “Like” Birdwatch Ireland on Facebook and follow @birdwatchie on twitter for great content, bird related discussion … END_OF_DOCUMENT_TOKEN_TO_BE_REPLACED