You are here: Home / Archives for Westmeath 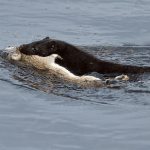 Athlone Tidy Towns committee has declared war on the feral mink population after noticing a marked decline in local wildfowl. The town in County Westmeath approached the National Parks and Wildlife Services (NPWS) when the committee noticed that waterfowl numbers were falling in the area. When they discovered that non-native mink were the likely cause the Tidy Towns committee … END_OF_DOCUMENT_TOKEN_TO_BE_REPLACED