You are here: Home / Archives for Eugenie Regan

Dr. Eugenie Regan is an Irish ecologist, researcher, naturalist and author. She works at the National Biodiversity Data Centre where she co-ordinates projects such as the Irish Butterfly Monitoring Scheme and edits the bulletin, Biodiversity Ireland. She has published widely on Irelands biodiversity, in particular on Irelands insects.

Eugenie is passionate about increasing our knowledge of Irelands invertebrates and communicating the importance of their conservation. 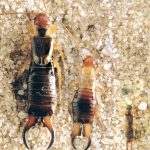 Dr Eugenie Regan from the National Biodiversity Data Centre introduces us to Ireland's three species of earwig.Earwigs are an unloved group of insects. They generate reactions of disgust from the general public, are considered by most a pest, and are surely one of the reasons that insects have a bad name. But they are also a fascinating animal. For example, did you know … END_OF_DOCUMENT_TOKEN_TO_BE_REPLACED