You are here: Home / Wild Blog / Biodiversity / Irish Earwigs: the caring nature of a much maligned insect

Earwigs are an unloved group of insects. They generate reactions of disgust from the general public, are considered by most a pest, and are surely one of the reasons that insects have a bad name.

But they are also a fascinating animal. For example, did you know that earwigs display maternal care? A characteristic that is uncommon amongst the other 12,000 insect species in Ireland, who tend to abandon their young without any apparent concern. Not earwigs! Female earwigs care for their eggs and watch over their offspring after they have hatched as nymphs. This characteristic has fascinated and baffled scientists because insects rarely display such caring behaviour.

The common term, earwig, is derived from the Old English ēare, which means ear, and wicga, which means insect. The name may be related to the old wives’ tale that earwigs burrowed into the brains of humans through the ear and laid their eggs there. A strange tale which hasn’t done much for their PR! Indeed although ears are not their natural habitat, earwigs are predisposed to hiding in warm humid crevices and may occasionally crawl into the human ear canal (much like any other small organism).

Three species of these fascinating animals occur in Ireland. That’s a very small number compared to other insect groups, and is an advantage when trying to identify to species level. One difficulty with identifying earwigs is that the young look very like adults, but only the adults can be distinguished to species level. Luckily for us, two of our three species are very rare in Ireland. 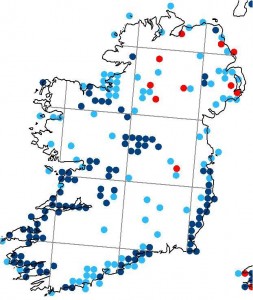 The Common Earwig as the name suggests is common and widespread in Ireland. It should theoretically occur in every 10km square but the National Biodiversity Data Centre has very few records for this animal.

The Lesser Earwig is a very small animal and easily confused with the young of the Common Earwig. It’s most easily distinguished by habitat as it only occurs in warm, moist dung heaps! Horse dung being a favourite! There are scattered records for this animal in the southern half of Ireland.

Lesne’s Earwig looks very similar to the Common Earwig and is perhaps overlooked in Ireland. To distinguish between the two species you need to look for wings protruding from under the thorax – these are present in the Common Earwig and the Lesser Earwig but not in Lesne’s Earwig. You’re only likely to encounter this species, however, if you live on the Waterford coast.

So if you are not looking in warm, moist dung heaps or live anywhere other than Waterford, you’ll only see the Common Earwig. Instead of reacting with disgust, committing pre-meditated murder, or running away when you next encounter an earwig, please take a moment to appreciate the unusual caring character of this insect and submit your earwig sighting to the National Biodiversity Data Centre. Every record we receive helps add to our understanding of the distribution of this fascinating animal in Ireland.

Dr. Eugenie Regan is an Irish ecologist, researcher, naturalist and author. She works at the National Biodiversity Data Centre where she co-ordinates projects such as the Irish Butterfly Monitoring Scheme and edits the bulletin, Biodiversity Ireland. She has published widely on Irelands biodiversity, in particular on Irelands insects.

Eugenie is passionate about increasing our knowledge of Irelands invertebrates and communicating the importance of their conservation.