You are here: Home / Archives for bycatch 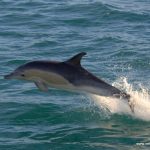 The Irish Whale and Dolphin Group (IWDG) has expressed concern at the possibility of what it describes as a "significant bycatch" of dolphins in Irish waters by foreign fishing vessels.Autopsy results on five of a group of 13 common dolphins that washed up dead in Co. Mayo in late January have confirmed that the animals died through injuries consistent with entanglement in … END_OF_DOCUMENT_TOKEN_TO_BE_REPLACED