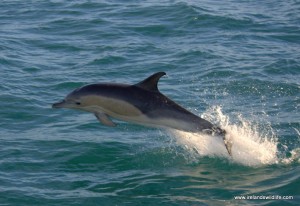 The Irish Whale and Dolphin Group (IWDG) has expressed concern at the possibility of what it describes as a “significant bycatch” of dolphins in Irish waters by foreign fishing vessels.

Autopsy results on five of a group of 13 common dolphins that washed up dead in Co. Mayo in late January have confirmed that the animals died through injuries consistent with entanglement in fishing gear.

“We are concerned that significant bycatch of dolphins is occurring in Irish waters by foreign fleets with no observers monitoring and quantifying these events to ensure they are not having significant impact on dolphin populations, which are all protected,” said Dr Simon Berrow, head of the conservation group. “The IWDG will be taking this bycatch issue up with relevant national and EU authorities.”

The Department of Arts, Heritage, and the Gaeltacht commissioned the autopsies following the unusual mass stranding event. The results revealed net marks on the dolphins’ fins, tail flukes and body wall, bleeding in the lungs and recently ingested prey in the stomach — indicating that the dolphins probably got caught in nets as they fed on shoals of fish near the trawlers.

“I am concerned by any killing of these species, even where accidental,” said Jimmy Deenihan, the minister for arts, heritage and the Gaeltacht. The Minister has called a meeting with the Department of Agriculture, Food, and the Marine to establish what actions the authorities can be take to reduce the risk fishing gear poses to dolphins in Irish waters.

Agriculture minister, Simon Coveney was quick to point out that there is no evidence that Irish fishing vessels were involved.

“In addition to our own boats, many other European fleets operate in Irish waters, an area that is intensely fished,” said Mr Coveney. “On the basis of these examinations it is not possible to determine which of these fleets might have been involved in this incident.”