You are here: Home / Archives for corvids 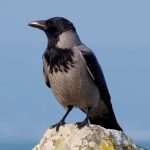 The hooded crow, grey crow or “hoodie” as it's sometimes called, is almost identical to the closely related carrion crow (Corvus corone) except for its distinctive grey and black plumage. The two birds are so similar in fact that until recently they were considered to be different races of the same species, but now hooded crows have been formally acknowledged as a species in … END_OF_DOCUMENT_TOKEN_TO_BE_REPLACED 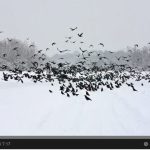 Given clear views on the ground adult crow species generally present few ID problems... but throw juveniles into the mix, and birds in flight at distance, and they become surprisingly tricky.There are clues you can use to identify crows accurately even in these situations. In this video the BTO run through the common crow species -- all of which breed here in Ireland, with … END_OF_DOCUMENT_TOKEN_TO_BE_REPLACED