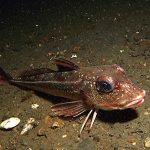 The grey gurnard is a fish of the north east Atlantic, and is found as far south as Morocco and into the Mediterranean. It is relatively common around Ireland, and of the three species of gurnard found in our waters is the most likely to be encountered near the coast. In fact young grey gurnard often frequent quite shallow water, and occasionally follow the tide up into the … END_OF_DOCUMENT_TOKEN_TO_BE_REPLACED