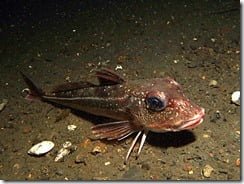 The grey gurnard is a fish of the north east Atlantic, and is found as far south as Morocco and into the Mediterranean. It is relatively common around Ireland, and of the three species of gurnard found in our waters is the most likely to be encountered near the coast. In fact young grey gurnard often frequent quite shallow water, and occasionally follow the tide up into the intertidal zone.

If you’ve ever been paddling on a beach in summer and spotted a small fish scudding away from your, there’s a chance that it may have been a baby grey gurnard.

Like all gurnard, the grey gurnard is a peculiar looking fish. It has a boxy, angular head and a body that tapers dramatically towards the tail. Body colour is variable, but is generally dominated by shades of grey or grey brown, sometimes with a yellowish or reddish tinge around the face. The forward dorsal fin can be raised or lowered, and when raised is a large, rayed fan with a distinct black spot on the outer edge. The rear dorsal fin is much less prominent, elongated and runs along the back towards the tail.

Gurnard have large fan-like pectoral fins, the first three spines of which are separated and modified as sensory organs. The fish uses these to probe the substrate for its prey, and tends to look like its “walking” on these very thin “legs” as it moves slowly over the sandy bottom searching for buried crustaceans (crabs and shrimps), and small fishes (mostly gobies, flatfish, young herrings and sand eels).

This fish’s preferred habitat is sandy bottoms down to a depth of around 150 metres (492 foot), although they are sometimes found deeper than this. Although gurnard show a marked preference for sandy bottoms, they also frequent mud and rock as long as there’s suitable food available.

Gurnard are surprisingly vocal fish, and produce a a variety of sounds that include loud grunts and croaks. These sounds are generated by forcibly expelling gas from the swim bladder and are thought to help groups of gurnard to communicate with each other in the murky depths of the ocean.

In general gurnard species are not considered a commercial species in Ireland, and are mainly caught as by-catch by fishing vessels targeting more familiar species. As a result they are rarely seen in fishmongers or on the fish-counter at the supermarket. This is a shame, because gurnard is a very tasty white fish. It is also fast growing, matures early and is relatively abundant – all factors that make it much more resilient to fishing than more familiar overfished species like cod, haddock and hake.

As pressure grows to find alternatives to threatened fish stocks, gurnard should become more widely available. If you are a fan of white fish looking for a conscientious alternative to your regular favourites you could do worse than give gurnard a try.

For more suggestions on the sustainability of the fish you eat check out the UK based “Fishonline” website run by the Marine Conservation Society (www.fishonline.org). By being more careful about the fish we choose we can all do our bit to help preserve our marine environment.