You are here: Home / Archives for fly agaric 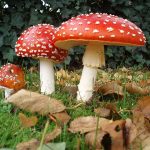 The fly agaric is the classic toadstool of children's fairytales, unmistakable with it's large red cap covered with white flecks. It is widespread and common, occurs throughout Europe and North America, and was introduced to Australia, New Zealand and South Africa with pine trees imported from Europe. Fly agaric appears between August and November, and is generally associated … END_OF_DOCUMENT_TOKEN_TO_BE_REPLACED