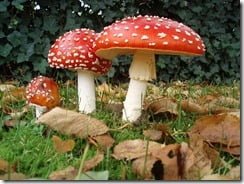 The fly agaric is the classic toadstool of children’s fairytales, unmistakable with it’s large red cap covered with white flecks. It is widespread and common, occurs throughout Europe and North America, and was introduced to Australia, New Zealand and South Africa with pine trees imported from Europe.

Fly agaric appears between August and November, and is generally associated with acidic soil beneath birch and spruce trees, with which it forms a symbiotic relationship. Fungi are neither plant nor animal, and belong to a completely separate group of their own. They are unable to use sunlight to produce food, like plants, and instead acquire their nutrients from living or dead plants, animal or other fungi.

The fruiting body of the fly agaric is a classical mushroom shape. The prominent cap is typically around 12cm (c. 6 inches) in diameter when fully developed, but some specimens may reach sizes of up to 30cm (c.12 inches) in diameter. The cap is a very prominent crimson, which gradually fades to orange and then pale yellow as it ages. It is scattered with white or yellow flecks or warts, which are actually remnants of a protective veil that shrouds the entire mushroom when it first emerges. These flecks can be washed off by rain, or brushed off with a finger. The white stem is from 5-20cm (2-8 inches) long, with a basal bulb that also shows remnants of the protective veil in the form of one or more ragged collars (or ruffs) circling the base.

Fly agaric is considered poisonous. It belongs to the same genus of fungi as the deadly death cap, although it is rarely fatal. In fact, the name fly agaric comes from the old European practice of using this fungi crushed, dipped or sprinkled in milk as an insecticide.

Despite its poisonous properties the consumption of this species in small amounts by indigenous populations is widely documented. The mushroom contains an assortment of psychoactive and hallucinogenic chemicals and has been used in various religious and shamanistic ceremonies for more than 2,000 years. These practices are particularly well documented for the indiginous people of Siberia, where the mushroom is involved in rituals to communicate with the spirit world.

The fly agaric’s religious connections are far reaching. It is widely thought to be the “Soma” talked about in Hindu scriptures, and some also believe it to be the “amrita” mentioned in Buddhist scriptures.

Closer to home, there is a popular myth that Nordic Viking warriors used to consume fly agaric to send them into their berserker rages, although compelling evidence for this theory is hard to find. Another theory, again difficult to substantiate, suggests that Zulu warriors consumed fly agaric before going into battle, and that this, in part, helped them to leave the field victorious after the famous battle against the British army at Isandlwana.

It is suggested that there is a connection between the fly agaric and the modern incarnation of Santa Clause. The mushroom’s red and white livery is reflected in Santa’s robes, and his use of chimneys is said to be symbolic of the Siberian shaman’s habit of entering huts through the smoke-hole in the roof bearing a sack full of these mushrooms. Reindeer are also particularly partial to this mushroom in the wild, and the hallucinogenic properties cause them to prance around wildly for some time – which could partially explain Santa’s association with flying reindeer.