You are here: Home / Archives for Iceland 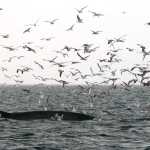 According to reports from the Whale and Dolphin Conservation Society (WDCS) Iceland's fin whale hunt is on indefinite hold this year. Reports indicate that the Hvalur Whaling Company will make 30 staff redundant as the country’s controversial whaling industry continues it’s slow but steady decline.Kristjan Loftsson, CEO of Hvalur attributed the move to the combined impact … END_OF_DOCUMENT_TOKEN_TO_BE_REPLACED