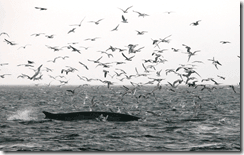 According to reports from the Whale and Dolphin Conservation Society (WDCS) Iceland’s fin whale hunt is on indefinite hold this year. Reports indicate that the Hvalur Whaling Company will make 30 staff redundant as the country’s controversial whaling industry continues it’s slow but steady decline.

Kristjan Loftsson, CEO of Hvalur attributed the move to the combined impact of damage to two Japanese processing plants in the recent earthquake there, and a collapse in demand for whale products. The company said that it would “not be feasible to start hunting for the near future”, however Hvalur foreman Gunnlaugur Fjólar Gunnlaugsson told Icelandic news media that a decision on whether to proceed with the hunt in August or September would be made later this summer.

Over the past two years Hvalur has slaughtered 273 fin whales in the north Atlantic, prompting censure from environmental groups and governments around the world.

While any pause in whaling is good news for north Atlantic fin whales, the WDCS highlights that conservation groups need to keep a close eye on developments and maintain international pressure on Iceland to cease its commercial whaling activity completely.

“It is too soon to claim victory, and Iceland’s whales still face the threat of harpoons,” warned WDCS anti-whaling campaigner Kate O’Connell. “In 2007, Iceland declared that it was ending commercial whaling, only to come back with a vengeance in 2009, targeting more whales and increasing exports. We must remain vigilant, and not let the whalers lull the world into a false sense that all is well.”