You are here: Home / Archives for Ilex aguifolium 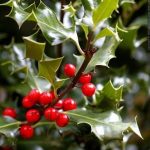 The bright red berries and waxy green leaves of the holly tree are a familiar sight in our winter hedgerows. An attractive combination, the contrast between the deep lustrous green of the foliage and the bright scarlet berries has led to holly being used as a Christmas decoration for many generations, and the association between holly and Christmas is now inescapable. Holly is … END_OF_DOCUMENT_TOKEN_TO_BE_REPLACED