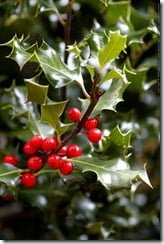 The bright red berries and waxy green leaves of the holly tree are a familiar sight in our winter hedgerows. An attractive combination, the contrast between the deep lustrous green of the foliage and the bright scarlet berries has led to holly being used as a Christmas decoration for many generations, and the association between holly and Christmas is now inescapable.

Holly is one of our few native evergreen shrubs. It is shade-tolerant and grows naturally in the murky under-story of our few remaining native broadleaf woodlands. Its prickly, evergreen leaves and its long-lasting berries were the source of much superstition in years gone by. People used to associate the tree with eternity and the power to ward off evil. Many a door and window would be decorated with holly to ward off evil spirits, and it was once believed that on Christmas Eve an angel would stand on every point of the holly leaf, and that the Good People would come in from the cold to shelter in the holly branches.

Many of the hollies we see growing today survived the woodman’s axe in days gone by because of these superstitions, and the hedgerows in which they now exist have grown up around them over the years. Holly does well in hedges: it is particularly tolerant of grazing livestock, which can only manage to eat the youngest, most tender leaves and shoots.

Another commonly held belief about the holly tree is that a good crop of berries heralds a particularly harsh winter to come. This is a fallacy: a fine crop of berries is more the result of a good summer than an omen of bad weather.

Holly berries, which only appear on female trees, are a popular food source for many birds as the colder weather sets in. Thrushes in particular throng to fruiting holly trees in early winter and can strip the berries in no time once a tree has been discovered.

As well as a valuable source of food holly also provides refuge for wildlife throughout the year. Because it’s evergreen the prickly foliage provides shelter for birds and animals right through the winter. Fallen leaves gather underneath holly trees, and because of their hardy nature they take years to rot down, providing a plentiful supply of protective nesting material for mammals such as hedgehogs – the prickly leaves are enough to dissuade many would be predators. Birds favour the protection offered by the dense foliage of a holly tree when they come to build their nests in spring. Blackbirds in particular seem to be drawn to holly when choosing a nest site.

The holly blue, a delightful little butterfly, relies on holly as a food plant for its caterpillars. In spring this tiny blue butterfly lays its eggs on the flowers of the holly tree, on which the caterpillars feed.

All of which makes holly an excellent native plant for the wildlife-friendly garden. It makes a superb hedging plant, offers great scope for attracting garden wildlife, and is one of our most attractive trees to-boot. It will grow in all but the wettest soil, tolerates conditions that many other trees and shrubs would not, and can be clipped and shaped as needed.

Holly wood is white, hard and dense and is often used for carving and inlay work. It has been stained black and used as a substitute for ebony in piano making, and mathematical instruments, knife handles and coffins were all once made of holly.

Some rights reserved by sean dreilinger