You are here: Home / Archives for seal 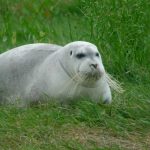 The discovery of a bearded seal in the small West Cork town of Timoleague late last week left Irish wildlife enthusiasts stunned, and led to widespread speculation about what it was doing so far south of its Arctic range.If you watch wildlife regularly you learn to expect the unexpected, and yet nature retains an almost unparalleled capacity to surprise and delight … END_OF_DOCUMENT_TOKEN_TO_BE_REPLACED

The Irish Seal Sanctuary has called for an urgent investigation by the National Parks and Wildlife Service into the massacre of seals off the coast of counties Waterford and Wexford.Four decapitated seals were discovered in Tramore, Co. Waterford at the end of last week, bringing the overall tally of dead seals found along the Waterford / Wexford coast over recent days to … END_OF_DOCUMENT_TOKEN_TO_BE_REPLACED