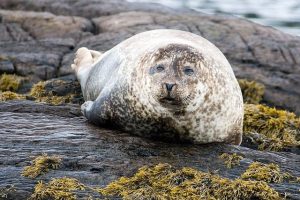 The Irish Seal Sanctuary has called for an urgent investigation by the National Parks and Wildlife Service into the massacre of seals off the coast of counties Waterford and Wexford.

Four decapitated seals were discovered in Tramore, Co. Waterford at the end of last week, bringing the overall tally of dead seals found along the Waterford / Wexford coast over recent days to at least a dozen animals. There are also unconfirmed reports of a number of dead harbour porpoises washed up in the area.

“It’s an evolving situation down there,” said Johnny Woodlock, spokesperson for the Irish Seal Sanctuary an interview with Radio Kerry on Saturday. “Only last night I heard there were a few dead porpoises washed in as well. If cetaceans are involved as well they’re also a protected species.”

In June of this year the persecution of seals hit the headlines when the decapitated heads of two common seals were nailed to boards outside the Dingle Seal Sanctuary in Co. Kerry, while back in February two grey seals with gunshot wounds were discovered in Tramore, Co. Waterford.

Seals are fully protected under Irish wildlife legislation, but come into conflict with local fishermen who blame the seals for falling yields and damage to fishing gear.