You are here: Home / Archives for suspicious deaths 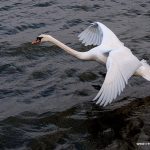 An investigation has been launched by authorities following the discovery of 32 dead mute swans at a lake in Co. Donegal.Conservation rangers recovered the birds earlier this week from New Lake in Dunfanaghy, which is a Natura 2000 “Special Protection Area” (SPA) under the EU Directive on the Conservation of Wild Birds. Reports suggest that many of the birds had been dead … END_OF_DOCUMENT_TOKEN_TO_BE_REPLACED