You are here: Home / Archives for vespula vulgaris 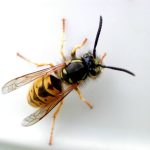 There are few animals in Ireland that provoke as much negative sentiment in people as the common wasp. It’s right up there with the brown rat as one of the nation’s least favourite animals. In truth though wasps are only really a nuisance between late August and the end of September. For the rest of the year, unless we inadvertently disturb an occupied nest, we’re generally … END_OF_DOCUMENT_TOKEN_TO_BE_REPLACED