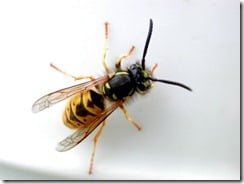 There are few animals in Ireland that provoke as much negative sentiment in people as the common wasp. It’s right up there with the brown rat as one of the nation’s least favourite animals.

In truth though wasps are only really a nuisance between late August and the end of September. For the rest of the year, unless we inadvertently disturb an occupied nest, we’re generally unaware of these busy insects as they go about their daily business.

Like some species of bees and ants, common wasps are social insects, and live in colonies that can number upwards of 10,000 individuals during the late-summer peak. Unlike bees, wasps have no means of storing food over the winter, so wasp colonies die out in mid-autumn each year, with only the newly mated queens surviving the winter in hibernation.

With the warmer weather of late spring these young, fertile females stir from their slumber and immediately start looking for suitable sites to start a new colony. These range from disused animal burrows, to hollow trees, to garden sheds and even attics. Once a suitable spot has been found the queen will start to build her nest, chewing up small pieces of wood in her powerful jaws and mixing it with her saliva to form a papery pulp. Once she has constructed the first few chambers she will start to lay eggs which will hatch into larvae that eventually become the infertile female workers.

The queen will continue to actively build the nest, lay eggs and feed the resulting larvae until she has reared enough workers to take over the day to day running of the nest. Workers will then expand the nest, tend the eggs and actively forage for food to satisfy an ever increasing number of larvae. The queen will concentrate solely on egg-laying from then on, and a single queen may lay as many as 25,000 eggs over the summer.

While adult wasps feed on sweet liquids, larvae need protein-rich food and this is largely provided in the form of insect prey and carrion. Workers actively hunt insects and other invertebrates, subduing them with their powerful sting, breaking them apart and chewing them up with their strong jaws to form small food pellets for the growing larvae. In return the larvae exude a sweet fluid that is lapped up by the attending workers. This reciprocal feeding is thought to play an important role in the social nature of the colony.

The wasps’ sting is primarily used to subdue prey, but is also a very effective means of defence. Wasps will defend the nest aggressively if disturbed, and the sting is thought to release a pheromone, a chemical signal that triggers other wasps in the vicinity to attack, so it is best to leave a discovered nest well alone. The same pheromone is also released when a wasp is squashed; therefore swatting wasps is generally a bad idea if you want to avoid a sting.

Towards the end of the summer the queen lays the last of her eggs which will develop into male drones and fertile females… next year’s queens. Once mature these males and females leave the nest and mate. The males then die and the females seek out a warm place to wait out the winter.

Workers are coming to the end of their life-cycle now, and are particularly aggressive. With no larvae left to feed and no nest building to do they change their habits. Their attention turns from protein rich foods to the sweet substances that they need to replace the sugary secretions formerly provided by the larvae. This is when wasps are a real nuisance, and when we are most likely to come into painful conflict with them.

By early October the colder weather kills off the last of the workers and wasps disappear until the dormant queens re-emerge the following spring to start the cycle all over again.