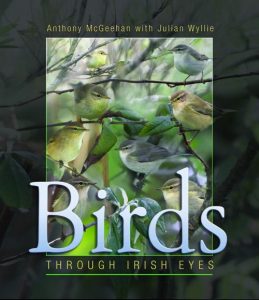 When “Birds Through Irish Eyes” by Anthony McGeehan with Julian Wyllie arrived at IWHQ the first thing that struck me was its size. It is a monster of a tome. The next thing I noticed was it’s shape… an unusual, almost square aspect ratio makes for a very attractive layout of text and images on the inside, but is perhaps a tad unwieldy for extended reading.

And this is a book you’ll want to spend a bit of time with.

Size and shape aside, I have to say that The Collins Press has done a sterling job here: this is another exquisitely produced nature publication from the Cork based publisher.

But enough about the aesthetics… lets get to the content.

The first bit of content you see is, of course, the cover — or more accurately the dust jacket. This is dominated by a “Photoshop-style” montage of chiff-chaffs and willow warblers… and for me it doesn’t quite work.

I’ve never been a big photo montage fan, and while this one isn’t badly done by any means, I can’t help feeling its a bit, well… gimmicky, for want of a better word. It tries too hard, and therein lies its downfall. But never has that old adage “don’t judge a book by its cover” held more true. On the inside this book offers a delightful combination of well thought out prose and, on the whole, excellent photography. Yes the occasional photo montage has managed to creep into the main body of the book too — but here they are used effectively to illustrate plumage variations and offer side-by-side comparisons of similar species, and for that they work well.

The book begins by setting the scene on the current state of Ireland’ bird life, looking at the events through Irish history that have shaped our current landscape, leaving it,  it has to be said, rather impoverished from the birds’ perspective. The authors delve into  interesting snippets like the rampant and unregulated deforestation of Ireland at the behest of Queen Elisabeth I — ostensibly to remove hiding places and ambush sites for Irish rebels, but also to sate the insatiable demand for timber and charcoal from a burgeoning British economy.

They mention the demise of the Irish capercaillie, the denuding of Ireland’s magnificent goshawk population to furnish the fists of English nobility with falconry’s most impressive prize, and move on to explore how more recent changes in agriculture and the drive for efficiency and profits has devastated our farmland birds.

But this is not a book about pointing fingers from the moral high ground of a conservation soapbox. This is a book, first and foremost, about the birds themselves.

The authors invite people to learn more about Irish birds, and write to instil the appreciation that is necessarily a prerequisite of conservation. Even the bad news the book delivers — and it would, frankly, be impossible to write a book about Ireland’s bird life without touching on a veritable tsunami of negatives — is delivered in a way that aims to emphasises the silver lining. The book highlights lessons we can learn from previous mistakes to hopefully inform a brighter future for both birds and people.

There are informative and well illustrated sections that help the uninitiated with practical advice:  how to look at birds in the field, the key things to look for when you see a bird you don’t recognise, and a comprehensive “roadmap” to the subtleties of bird plumage illustrated by labelled photographs of real birds you’re likely to see around you.

The species profiles are undoubtedly the stars of the show… beautifully illustrated with stunning photographs they tell each birds story from a refreshingly Irish context… and are filled with little gems and nuggets that serve to illuminate your understanding of the species.  Opening the book at random as I write this, for example, reveals that wheatears are superb mimics, often copying the alarm calls of other species — including chough, swallow, skylark, dunlin and even red-throated pipit — the latter presumably picked up elsewhere and carried with the migrating wheatear to Irish shores in spring. That mimicry is something I’ve never seen referenced in other books… and Birds Through Irish Eyes is full of such surprises, and you’ll find out new things about even the birds you know well.

The text throughout is informative and engaging. At times the writing hovers dangerously close to becoming overly flowery and verbose (always a danger when a writer is passionate about his or her subject), but on the whole it stays on the acceptable side of overkill. It is very well written and a joy to read.

Overall “Birds Through Irish Eyes” is a superb book that brings the story of Irish birds bang up to date. It’s a great achievement, and testament to the passion and commitment the authors’ to bring the story of Ireland’s birds to a wider audience. If you want to learn more about Ireland’s birds than you’ll ever pick up from a field guide then buy this book. You certainly won’t be disappointed.

Birds Through Irish Eyes by Anthony McGeehan with Julian Wyllie is published by The Collins Press and costs €39.99 / £35.00.

You can buy the book on Amazon or via the NHBS site here.

Other reviews of Birds Through Irish Eyes

I’ve never met Anthony McGeehan… although I have heard the name in birding circles over the years. I do know Julian Wyllie through the West Cork bird scene, and through the Ireland’s Wildlife Facebook Page, where he often posts and comments. The book was sent to Ireland’s Wildlife for review independently of the authors by The Collin’s Press.