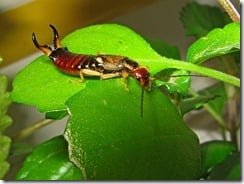 Earwigs really don’t deserve their bad reputation. The name earwig is derived from the old English ‘earwicga’ which means ‘ear beetle’. These harmless little insects are plagued by the perpetuation of an age-old superstition that earwigs crawl into the human ears at night and burrow into the brain to lay their eggs. In reality any earwig in the vicinity of a human ear is undoubtedly lost.

The common or European earwig is a small, smooth, elongated brown insect usually between 8 and 18mm (0.3 and 0.7 of an inch) long. Earwigs can fly, and have a pair of papery, fan-like hind-wings, although they are seldom used. For the most part they remain folded away beneath the short, leathery forewings. At the rear of the abdomen the earwig sports a pair of threatening-looking pincers that are actually used to help the insect fold its hind-wings away and as a defence to dissuade would-be predators. Sexes can be distinguished by the shape of these pincers, which are much more curved in male earwigs than in females.

Earwigs are nocturnal scavengers, and emerge at night to feed primarily on decaying plant and animal matter. They will also prey on some other insect species. They avoid light, and during daylight hours tend to hide in dark, damp crevices in buildings, gardens and woodland. They are often found in discarded hollow plant stems or under stones and plant pots in the garden.

Common earwigs are found throughout Europe, and their habit of seeking out dark, damp refuges has led to them colonising many other parts of the globe. While the earwig design is ill-suited to crawling or flying long distances they are consummate stowaways. They hide away in all sorts of dark nooks and crannies, and end up inadvertently hitching a ride in containers bound for foreign shores.

Female earwigs are among the best mothers in the insect world. In the spring the female will hollow out a brood chamber, usually under a rock. She will then lay a cluster of small, round eggs and will guard them diligently until they hatch. The female will turn each egg periodically, and clean it gently in her mouthparts to guard against fungal infection and disease. When the young earwigs hatch they are tiny translucent miniature adults. Once all of her babies have hatched the female leaves the nest to forage for food. While she’s gone the young huddle together and stay in the nest until she returns to feed them. The female continues to guard and care for her young in this way until they are large enough to forage for themselves.

Earwigs are one of nature’s refuse collectors, and play an important part in the ecosystem cleaning up decaying plant and animal matter and returning nutrients to the soil for use by future generations of plants. Without them, and other scavanging insects like them, this natural recycling system would fail and our environment would quickly deteriorate.

Like so many of our creepy-crawlies, the earwig’s bad press is completely unwarranted, so the next time you spot one in the garden remember that it’s not heading for anybody’s ear – it’s going about its business of cleaning up the environment to the benefit of us all.