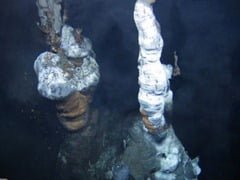 The programme will be broadcast on Sunday 28th October at 6pm on National Geographic channel on Sky (channel 526) and UPC (channel 215).  The programme presenter is Dr  Robert Ballard, famed explorer who found the Titanic at its final resting place.

Supported by the Marine Institute under the 2011 Ship-Time Programme a team of scientists from a variety of institutions in Ireland and the UK worked from the Irish National Research Vessel, the RV Celtic Explorer. The goal was to track down a previously uncharted mid-atlantic hydrothermal vent field some 3,000 metres below the surface of the mid-Atlantic where the earth’s tectonic plates push up from the ocean floor. The vents – chimney like formations protruding from the mid-Atlantic ridge – spew plumes of black, superheated water full of a complex cocktail of chemicals and minerals that allow extraordinary life to thrive in the deep.

“It’s great to see Ireland’s expertise recognised on TV”, said Dr Andy Wheeler from the School of Biological, Earth and Environmental Sciences (BEES) at University College Cork, leader of the scientific team on board.  “Discovering a new volcanic landscape three km below was a thrill.” The expedition involved scientists from UCC, NUI Galway, Geological Survey of Ireland, the University of Southampton and the National Oceanography Centre in the UK.

The team named the previously uncharted hydrothermal vent field, the first ever explored north of the Azores, the “Moytirra” Vent Field, after a battlefield from Irish mythology that means ‘Plain of the Pillars’.