An account of a memorable encounter with grey seals off the West Cork coast in Summer 2010. 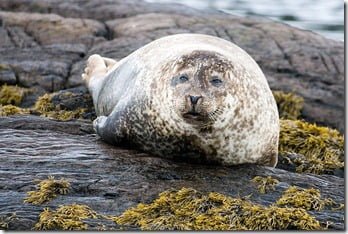 We call them natural disasters: events like earthquakes, tsunamis, eruptions, hurricanes… nature’s raw power at its most awe inspiring and terrifying.

Luckily few of us ever experience the full destructive power of nature first hand, but we can all feel its presence. It’s in the breakers rolling up a stormy beach, or the winter gales that whip our coastline: the relentless energy, the insistent surge. You can sense it even on the calmest days, a latent potential for violent change that makes the natural world so unpredictable and fascinating.

This was such a day.

I’d never seen the Atlantic so at peace, and it made me uneasy. Nature is all about equilibrium, and I couldn’t help feeling that this faux tranquillity would have to be balanced by some violent force… any minute now. That’s not an altogether comfortable sensation when you’re over deep water in an inflatable kayak. It makes you feel terribly insignificant and vulnerable.

It was mid August. A small group of us had spent the night camping on Rabbit Island, a small hunk of rock just off the West Cork coast not far from the fishing port of Union Hall. We awoke to a morning straight out of a story book. The sky was that cobalt post-dawn shade you only get a few times each year, like a picture in a travel brochure photo-shopped to within a hair’s breadth of credibility. The air was still, and it was hard to accept the unblemished expanse of water disappearing over the horizon was actually the Atlantic Ocean. “Don’t use clichés in descriptive writing” say all the experts, but every now and again clichés are the only thing that fits the bill. That morning the ocean really was flatter than any mill-pond I’d ever seen.

Conditions were perfect for kayaking, so we set out on a circuit of “nearby” High Island. It turned out to be much further than it looked, and as we crossed the channel my eyes involuntarily scanned the murky depths. I kept telling myself I was looking for signs of passing wildlife, but deep down I knew what I was really looking for was signs of trouble. There are no documented instances of apex predators worrying people off the Irish coast, but try telling your sub conscious that when you’re floating exposed in a blow-up canoe.

There was a palpable sense of relief when we reached the lower tip of High Island without incident. That’s when we encountered our first seal. It was a young grey seal sitting on an exposed rock catching the early morning rays. As we approached it slipped silently into the water, its dappled fur transformed instantly to a lustrous sheen. We rounded the rock and were suddenly surrounded by curious pinipeds.

There’s something about being low on the water that takes a seal encounter to a whole new level. You connect with them, and they engage with you in a way that simply isn’t possible from a larger vessel. It also gives you a real sense of scale.

About fifteen seals in all were taking it in turns to investigate these new arrivals. The group was mostly adult females and a few youngsters, but they were accompanied by two humongous bulls. At 3 metres long and weighing around 300kg they were longer and significantly heftier than our kayaks. Yet I was far less nervous of these huge animals than I had been of the dark emptiness below me minutes earlier.

I watched them gliding by under the surface with a grace that belied their massive bulk. They’d pass beneath us, surface nearby with a “Pffft!” of exhaled air, look straight at us and then dive with a flick of their flippers and an audible splash. They were playing; not the cat-and-mouse play of a predator toying with its prey, there was no threat or malice, just unbridled curiosity and more than a smidgen of fun. I’m always wary of anthropomorphising wildlife encounters… but these seals were clearly enjoying themselves.

After a while we decided enough was enough and paddled on around the island. The cliffs were alive with seabirds, and again the kayak gave me a completely new perspective on a scene I’d experienced many times before. Out to sea bigger things were stirring. Three tall, robust vapour plumes erupted from the surface in quick succession, hanging in the still summer air: the blows of fin whales. They were some distance away, but simply knowing we were sharing the same expanse of water with these leviathans was a humbling experience.

“Pfft!”… “Pfft!”… “Splash!”. I turned: the seals were following us. Seven of them stayed with us all the way back to Rabbit Island, some ahead, some behind, the rest flanking us. It was a phenomenal wildlife experience that will always stay with me.

And perhaps that is the most extraordinary natural power of them all: the boundless capacity to thrill, inspire and delight.