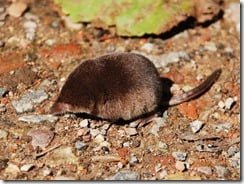 As its name suggests the pygmy shrew is small. In fact at just 2.5 to 6g (0.09 to 0.2 oz) in weight it is by far Ireland’s smallest mammal and ranks as one of the smallest in the world. The pygmy shrew is our only shrew species, and along with the hedgehog, is one of only two insectivores (animals whose diet consists predominantly of insects and other invertebrates) found in Ireland.

Adult pygmy shrews have a body length of between 4 and 6 cm (1.6 and 2.4 inches) and a tail that’s about 3-5 cm (1.2-2.0 inches). They have small eyes, a long pointed snout and long whiskers. Their body is covered with short, dense grey-brown fur that is lighter on the underside of the animal. 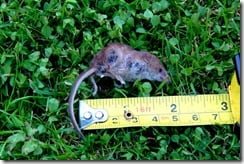 Because they are so small pygmy shrews have to remain active more or less constantly. Their diminutive size means that they have a high surface area in relation to their volume – and that means that despite their dense fur coat they lose heat very quickly. To compensate shrews have a very high metabolic rate, which generates the heat they need to survive, but also means they need a lot of fuel relative to their body size.

Basically for shrews resting is a dangerous business. A pygmy shrew needs to eat more than its own body weight every day to survive – and if it goes without food for more than two hours it could starve to death. Shrews have to stay active day and night, all year round.

Pygmy shrews feed on insects, spiders and other invertebrates. They seem to have a particular predilection for woodlice. When foraging they rely on their sense of smell, touch and hearing more than their eyesight, which is thought to be poor. To extract as much energy as possible from their food pygmy shrews sometimes consume their own droppings, passing the food through their stomachs a second time to absorb more nutrients.

Solitary and territorial in nature pygmy shrews don’t tolerate the presence of other individuals within their territory. They hiss, make high-pitched squeaking noises, and will fight if necessary to drive away intruders. The obvious exception is when males and females come together to mate. Mating is brief, and males soon leave.

After a gestation period of 22-25 days the female gives birth to a litter of four to seven young. Births generally occur between April and September, peaking in June and July. Newborn shrews only weigh about 0.25 g (0.01 oz) but grow quickly and are fully weaned at around 22 days, when they leave to fend for themselves. Female pygmy shrews typically rear two litters each year.

Pygmy shrews don’t live long, and have a maximum lifespan of about 16 months. In reality not many will make it beyond their first few months. Their small size and their need to feed constantly makes them particularly susceptible to unpredictable environmental change – like inclement weather – and sustained periods of bad weather can wipe out large numbers. They also have a host of predators that include owls, foxes, stoats and perhaps their greatest enemy, the domestic cat.

Pygmy shrews are common and widespread – occurring all over Ireland wherever there’s sufficient ground cover. Despite that they are rarely seen – mainly because of their small size and secretive nature. Unfortunately the only time many of us see a pygmy shrew is when the pet cat brings one back to the house. Other threats include habitat loss, intensive grazing and the widespread use of pesticides.