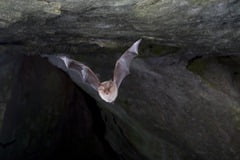 The internationally protected Lesser Horseshoe Bat has been granted a reprieve in County Clare after Minister of State for Housing and Planning, Jan O’Sullivan, intervened in a controversial council zoning decision.

Reports indicate that the Minister took the unprecedented move of issuing a “notice of intent” directing the council to change the Clare Local Area Plan it formally adopted on 11 June. The notice relates to the land adjoining Poulnagordon Cave, a known roosting site for a colony of the internationally protected bat species, and directs the Council to re-designate it for agricultural rather than residential use.

The lesser horseshoe bat belongs to a different bat family to all other Irish bat species, it’s range in Ireland is limited to six western counties: Clare, Cork, Galway, Kerry, Limerick and Mayo. Bat Conservation Ireland estimates the Irish population of this species at around 9,500 individuals. It is considered of international importance because of dramatic declines and even extinctions in other European countries.