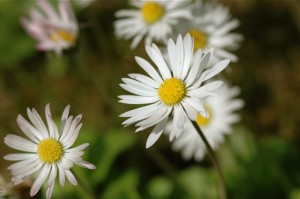 From early spring to late autumn the common daisy, with its pretty white-petalled flower heads and golden-eye waves cheerily at us from garden lawns, parks, meadows and pastures. Although classed as a weed, this ubiquitous little wild flower holds very broad appeal – a legacy perhaps of its associations with many childhood games, like the making of daisy chains.

The daisy is an herbaceous perennial that grows on all sorts of grassland that is mowed, grazed, trampled or otherwise disturbed. It thrives best in areas that become quite wet for part of the year, but will happily exist in a wide range of conditions.

A neat rosette of small, hairy spoon-shaped leaves grows flat to the ground and remains green throughout the year. The flower head is 2-3 cm (c. 1 inch) in diameter supported on a leafless stem some 2-10cm (c. 1-4 inches) tall. Although the daisy’s upturned flower heads looks like individual flowers they are actually compound flowers made up of many small, tightly packed florets. The flower head consists of a bright golden-yellow central disk composed of “disk florets” surrounded by the petal-like white “ray-florets” that often have a pink or reddish tinge at the base and on their under-side. The flowers open up to greet the morning sun, and are visited throughout the day by an eclectic assortment of insects before closing up again as the light fades.

Daisies have often been championed in literature, and Chaucer described them as his favourite flower, the “day’s eye” and the only plant that could “soften all my sorrows”, while Shelley likened the flowers of the daisy to earthbound stars.

Despite its many advocates the daisy is still classed as a weed and many gardeners are repeatedly frustrated by their attempts to eradicate this unassuming little plant from their carpet-like lawns. It’s a problem compounded by the fact that mowing and tending a lawn actively encourages daisies to thrive.

Instead of investing the considerable energy and time it takes to rid the garden of daisies, a lot of people choose to live with this cheerful little flower. Its a decision that does no real harm, ads a certain charm and can be a great boon to the wildlife that increasingly relies on our gardens.

Daisies are widely recognised as a healing herb. The plant used to have a great reputation for treating fresh wounds, and a distillation from the plant was once taken as a treatment for inflammatory disorders of the liver. In the 14th Century the daisy was the principal ingredient in an ointment widely used to treat wounds, gout and fevers.

In today’s era of modern medicine, antibiotics and anti-inflammatories herbal remedies have become less well known, but are showing something of a resurgence as people look for more traditional and natural alternatives to treat their day-to-day ailments. As well as its traditional use as a herbal remedy the daisy also lends its name to the widely used homoeopathic remedy Bellis Perennis, which is said to promote healing and prevent suppuration after deep tissue wounds or trauma, and is indicated as a remedy for a variety of complaints.

One thing is certain, the daisy is in plentiful supply, and is unlikely to become scarce any time soon. The plant is common, widespread and thriving throughout its range. This is one species that certainly doesn’t seem to be threatened by our overzealous exploitation of the natural world; not yet, at least.