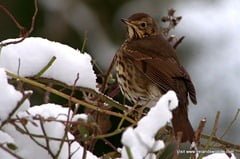 The song thrush is a familiar thrush species, and one of Ireland’s finest songsters. A key player in the acclaimed “Dawn Chorus”, this attractive speckled thrush is a familiar sight in many Irish gardens, and according to Birdwatch Ireland’s annual Garden Bird Survey features regularly as one of our top 20 garden species.

This is a resident species, and is found all over Ireland throughout the year. In winter, the resident birds are joined by migratory birds from northern Europe. It occurs in woodland, farmland, hedgerows, parks and gardens nationwide.

Song thrushes have a typically thrush-like body shape – similar to that of the closely related blackbird, but a little smaller. Adults song thrushes reach a length of about 23cm (c. 9 inches). Their plumage is a warm brown above, with a creamy underside heavily marked with rows of dark brown arrow-shaped spots. Sexes in this species are similar, and juvenile birds tend to resemble the adults, but have buff streaking on their backs and smaller spots on their underside.

The song thrush may occasionally be confused with the much more robust and larger mistle thrush, and possibly with the overwintering redwing – a visitor from Scandinavia. However, the song thrush has a much more delicate and diminutive form that rules out its larger Irish cousin, while it lacks the distinctive white eye-stripe and obvious red wing bar of its visiting Scandinavian relative.

The song thrush is a formidable singer, and has a loud, fluting, far-carrying voice. Its familiar song resembles that of the blackbird, but the song thrush has a characteristic tendency to repeat each “phrase” of the song several times before moving on to the next. Typical song phrases include a repeated “cherry dew, cherry dew, cherry dew” and “knee-deep, knee-deep, knee-deep…”. The alarm call is an agitated loud rattle or a soft “seep”-like note.

Song thrushes feed mainly on insects and other invertebrates, and also take berries and fruit when in season. They are particularly fond of earthworms, slugs and snails. Like other thrushes, they are ground feeding birds, and can often be seen hopping along, then stopping dead, head cocked on one side, watching the ground intently for any sign of a prospective meal.

The song thrush is famous for its unique method of feeding on snails. It picks the hapless mollusc up in its bill, then, with a flick of its head, it hits the shell repeatedly against a stone or other hard object. When the shell smashes, the thrush can get to the tender flesh of the animal taking refuge within.

Song thrushes often have a favourite stone – or anvil – that they use repeatedly for this purpose. If you come across a large stone surrounded by fragments of snail shell in the garden, then you’ve found a song thrush’s anvil.

Breeding takes place between March and August. The thrush builds a nest of moss and grass, lined with mud, in a tree, bush or large hedgerow. In it the female lays 4 to 6 pale blue eggs with black speckles, which she incubates for 11-15 days. The young birds leave the nest some 12-16 days later, giving the parents the opportunity to rear 2-3 broods during the course of the long breeding season.