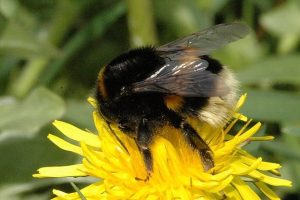 The slow, lazy buzz of the bumblebee is a fundamental part of the Irish summer. These fat, furry, ponderous bees trundle from flower to flower, collecting pollen and nectar to support their growing colony. They liven up the summer garden, and provide an invaluable pollination service to the plants they visit.

We have 18 species of bumblebee in Ireland, all of which have suffered a worrying decline over the last three decades. Six of our 18 species are deemed to be facing extinction here unless we take immediate and substantial action to preserve them.

The problem stems from the dramatic changes to bumblebee habitat in Ireland over the last thirty years or so. Bumblebees thrive in natural open expanses of grassland that supports a diverse array of species, including valuable food plants. Changes in agricultural practices and increasing development and forestry pressure on these sites mean that they are becoming increasingly scarce, and that in turn has a knock-on effect on many insects, including the bees.

Bumblebees are one of natures great workers, and are a vitally important part of a healthy ecosystem. Without bumblebees many of our plant species wouldn’t be pollinated in sufficient numbers to sustain their populations, and would themselves go into decline. Bumblebees are also vital as pollinators of several commercially grown crops – without bees the crops would fail – so its in our own interest to do what we can to protect and encourage bumblebees whenever possible.

Although there is some variation in shape between bumblebee species they tend to follow the familiar fat and furry body pattern. Most species sport the familiar black, yellow and white colouration, but some have orange or even red.

In spring the hibernating queen emerges and starts looking for a suitable place to set up her new colony. Different species use different nesting sites, but some common locations are leaf litter beneath hedges, abandoned rodent burrows and cool, dark spaces beneath stones and boulders. Once she finds the right location the queen creates a small chamber, builds an egg cell of wax and pollen and starts to lay eggs.

When the grubs emerge the queen feeds and cares for them herself until they pupate and metamorphose into female workers. These workers take over the running of the hive while the queen concentrates on laying eggs. She continues to produce female workers until the colony reaches its peak, at which point she lays the eggs that will turn into the next year’s queens and male drones.

Once hatched the drones leave the nest to mate with the new queens and lead independent lives. The young queens, unlike those of honey bees, continue to live and work with the colony for the remainder of the summer and autumn. Come the first sharp frost the drones, female workers and the old queen will die off, leaving the new queens to find a sheltered spot to wait out the winter before beginning the whole cycle again.

It is an often touted myth that according to the laws of aerodynamics a bumblebee shouldn’t be able to fly. This is thought to stem from the 1930s, when an engineer worked out the aerodynamics of a bumblebee at a dinner party. He failed to account for the fact that the wings are not static, and move in a figure-of-eight pattern of around 200 beats per second, creating tiny vortices and helping the bumblebee to achieve flight.