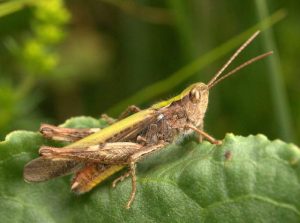 The chirping of grasshoppers is a familiar sound from Irish meadows and roadside verges during the summer months. Undoubtedly contributing its song to this chorus is the Common Field Grasshopper, which is one of our most common and widespread grasshopper species. It is found throughout Ireland, although it does becomes scarcer in the far north.

Common field grasshoppers belong to an order of insects called the Orthoptera which includes grasshoppers, crickets and locusts. They are fairly large grasshoppers, typically between 18-24 mm (c. 0.7-1 inch) long, and while they are generally considered to be a brown grasshoppers, they come in a bewildering array of colours that include greens, browns and purples; generally with variable degrees of black, brown or grey mottled markings.

Like all grasshoppers common field grasshoppers posses a pair of powerful hind legs that allow them to jump high into the air; long, toughened fore-wings that serve to protect the delicate hind-wings beneath; and powerful biting mouth parts. In this species the fore-wings show a distinct bulge at the base. They also often have an orange tinge at the tip of their abdomen, although this is not always present.

The variability in colouration and markings means that accurate identification of grasshopper species in the field requires careful examination of the specific shape and markings of particular body parts. The common field grasshopper, for example, has an inflected and angular pronotum (the frontmost section of the animal’s thorax) with black, wedge-shaped markings that don’t reach all the way to the back edge. It also has relatively few “stridulatory” pegs on its hind legs (the protrusions that, when rubbed against the toughened veins of the forewings, allow the grasshopper to produce its characteristic song).

Common field grasshoppers are strong fliers that are particularly active in warm weather. They prefer dry, grassy habitats, and are often common on roadside verges, parkland and waste ground. On warm days it can often be seen sunning itself in the open on walls, patches of bare earth or on paths. The familiar song consists of a series of chirps, each around half a second long. Males often chirp at each other in turn, and this sonic rivalry is characteristic of the species. During courtship they also produce a “ticking” sound.

During the summer female grasshoppers lay a large egg pod containing up to 15 eggs just below the surface of dry ground, or sometimes inside anthills. There they will stay over winter before hatching the following May. Grasshoppers go through a development cycle known as “incomplete metamorphosis”, in which larval stages of the insect – termed “nymphs” – tend to resemble miniature, wingless versions of the adults. These nymphs go through a series of moults before they finally reach their winged, sexually mature adult form, usually sometime in June.

Once they have mated and laid their eggs, the adults, which are unable to survive the winter, will ultimately perish. However, the common field grasshoppers is better able to survive cold conditions than many other grasshopper species. It’s not unheard of for them to survive into December before they finally succumb to the inclement weather.