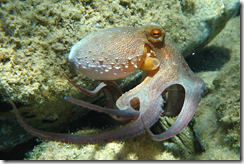 The common octopus is an extraordinary creature. It’s a molluscs – a relative of the slugs and snails you find in your garden, and along with the cuttlefish, squid and nautilus, belongs to a group of marine molluscs known as cephalopods. Literally translated the name means “head-footed”, and the bizarre-looking cephalopods certainly look as if their tentacle-like arms sprout straight from their large heads.

The common octopus has a worldwide distribution in tropical, sub-tropical and temperate seas. Here in Ireland it is approaching the north-eastern limits of it’s Atlantic range, and occures off the south and south-west coasts, and up the east coast as far north as Dublin Bay. The species may be extending its range northward as water temperatures rise through the effects of climate change.

Common octopuses live in coastal waters and the upper part of the continental shelf up to a maximum depth of about 150 metres (492 foot). Small specimens are sometimes found in deep rock-pools on the extreme low-shore, although they can be very difficult to spot given their exceptional ability to blend in with their surroundings.

This is a medium to large octopus that can reach lengths of over 1 metre (3.3 foot), but which is generally nearer the 60cm (c. 2 foot) mark when fully grown. It has a well developed head, large, complex eyes that give it excellent colour vision, beak-like jaws and eight muscular arms each lined with a double row of suckers. Although it can change both the texture and colour of its skin at will, it tends to be a mottled yellowish or greenish brown, and the skin of the body is generally covered in raised bumps or warts.

Octopuses are predatory, and actively hunt crustaceans and bivalve molluscs. They are mainly nocturnal, although they do occasionally emerge from their lairs for a daylight hunting sortie. To get about over short distances octopuses crawl along using their arms and suckers, but when they need to cover greater distances, or when speed is of the essence they use jet-propulsion. By contracting the muscular mantle an octopus can expel a jet of water in any direction it chooses through its funnel-like siphon, conveniently thrusting its body in the opposite direction.

The octopuses peerless ability to change colour isn’t all about concealing itself – colour can also reflect the animals mood, and octopuses have been observed to turn white with fear and red with anger. Colour change also plays an important role in the ritualised courtship display that is a precursor to mating.

After mating the female octopus lays anything from 120,000 to 400,000 eggs, each smaller than a grain of rice. She guards the eggs, cleaning them with her suckers and fanning them with oxygenated water until they hatch. This brooding period can last from 25-60 days, depending on the temperature of the water, and the female does not leave the eggs to feed during this time. Many females die soon afterwards.

Once hatched the octopus larvae drift in the plankton for about 40 days before settling to the sea bed at a size of around 12mm (0.5 inch). During this time many become food for other animals, and in all only one or two of the original brood will survive to adulthood.

Although we don’t tend to eat much octopus in Ireland in many parts of the world they are considered a delicacy. Commercial octopus fisheries land between 20,000 and 100,000 tonnes of common octopus each year.