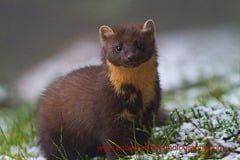 The secretive and elusive pine marten was once found throughout Ireland, but a combination of habitat destruction, hunting for their skins and persecution by gamekeepers during the early part of the 20th century meant that by the 1950’s few martens survived. These days pine martens are protected and their fortunes are improving. Numbers are increasing slowly, and in areas where suitable woodland habitat exists the species is gradually extending its range. The Burren in Co. Clare is considered to be the pine marten’s Irish stronghold.

A member of the mustelid family (along with the otter, badger, stoat and mink), the pine marten is the only Irish representative of the group at home in trees. They are exceptionally agile climbers, and spend much of their time above the forest floor, leaping squirrel-like from tree to tree as they travel.

Pine martens are active mainly at dusk and during the night. They have an incredibly varied diet that changes according to the seasonal availability of various foods. Predominantly carnivorous, martens actively hunt birds, squirrels, other rodents and rabbits. They also take birds’ eggs and carrion given the opportunity, and at certain times of the year berries and honey can play an important role in their diet. In spite of their almost peerless climbing ability martens prefer to hunt their prey on the ground.

Although pine martens occur in a wide range of habitats they tend to prefer well wooded areas that offer plenty of cover. They live in dens often situated in hollow trees or among the root masses of fallen Scots pine, an association that may have contributed to the label “pine marten”. They will also occupy disused squirrel nests (dreys), and in the absence of heavily wooded areas will make use of inaccessible cliff faces covered with dense scrub as alternative den sites.

Pine martens are territorial, and both male and females maintain territories that vary in size according to the type of habitat and the availability of food. Male territories tend to be larger – typically from 10-25 square kilometres (c. 4-10 square miles), while females usually patrol a smaller patch of between 5-15 square kilometres (c. 2-6 square miles). As with other mustelids martens mark out their territories by depositing strong-smelling “scats” in prominent areas, often along forest trails. These scats communicate to other martens that they are entering an occupied territory.

Mating usually occurs between July and August, but implantation of the fertilised egg is delayed so that young are born the following spring. Between one and five (usually three) deaf, blind and helpless young are born. After spending several months developing in the den they begin to emerge around the middle of June and become fully independent at about six months of age. Male pine martens play no part in the rearing of their young.