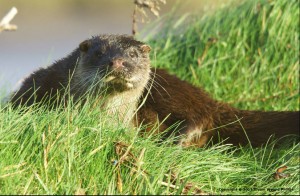 Ireland is considered to have the healthiest otter population in Europe. Surveys show that otters are present in more than ninety percent of our inland waterways and coastal waters. The species, already extinct over much of its former range, is listed as “vulnerable to extinction” by the IUCN (International Union for the Conservation of Nature) and the thriving Irish otter population is of international importance in terms of otter conservation.

Despite being widespread, and in some areas locally common, the otter is an elusive and secretive animal that is rarely seen. Superb eyesight, an acute sense of smell and exceptional hearing usually give the otter plenty of warning when people are around and it tends to stay out of sight. Even people studying otter populations rely heavily on the readily recognisable signs of their activity and consider themselves lucky to catch a glimpse of their subjects.

Otters are between 55 and 130 centimetres (22 to 51 inches) long and typically weigh between 5 and 12 kilos (11 and 26 pounds), with dog otters slightly larger and heavier than the bitches. They are the only truly amphibious members of the weasel or mystelid family, and are superbly adapted to the aquatic life they lead.

Their long, sleek bodies; short, powerful legs; webbing between the toes and strong, rudder-like tails combine to give otters tremendous propulsion and exceptional manoeuvrability in the water. When diving otters close their ears and nostrils to keep water out, and their coat keeps them dry and warm in even the coldest conditions. The coat, chestnut brown in colour and slightly lighter on the belly, is actually made up of two distinct types of fur. A thick outer layer of waterproof guard-hairs covers a very dense, fine under-coat which provides much needed insulation.

During the day otters sleep in a burrow known as a holt, usually situated under tree roots or another suitable location on the banks of a lake, river or stream. At dusk they emerge to hunt their favourite food. Otters eat mainly fish, which they actively chase underwater using both sight and their long, sensitive whiskers to detect their prey. They also take crustaceans, small waterfowl, frogs and small mammals. Once a meal is caught the otter will usually return to dry land before consuming it, and food remains are one of the regular signs of otter activity used by scientists to monitor populations. Another commonly encountered otter sign is their spraints or droppings.

Spraints are usually deposited regularly at specific sites as territorial markers, and provide an array of useful information to other otters in the area. They are cigar shaped, about 3 to 10 centimetres (1 to 4 inches) long and are tarry and black or dark green in colour when fresh. They have a very distinct musty odour that is often described as like newly mown grass or jasmine tea. As they age the spraints fade to grey, but retain the distinctive odour.

Otters breed once every two years, as the cubs remain dependent on their mothers for the first year of life. Breeding can take place at any time of the year, and after a period of nine weeks gestation one to four cubs will be born in a nest of straw and weeds within the holt. Blind at birth and covered in a warm downy fur, the cubs eventually open their eyes at around 35 days old, but will stay in the holt for another few weeks before they start to venture forth under the watchful eye of their mother. Otter cubs are weaned onto solid food after 3 to 4 months, but stay with their mother for the first 12 to 15 months of their lives.

While the Irish otter population is healthy at present, current downward trends in our water quality, increasing human encroachment along our waterways and rising levels of pollution are all worrying signs. Let’s hope that these trends will be reversed soon, for the otters’ sake and for our own!