You are here: Home / Featured / A brush with Ireland’s urban foxes 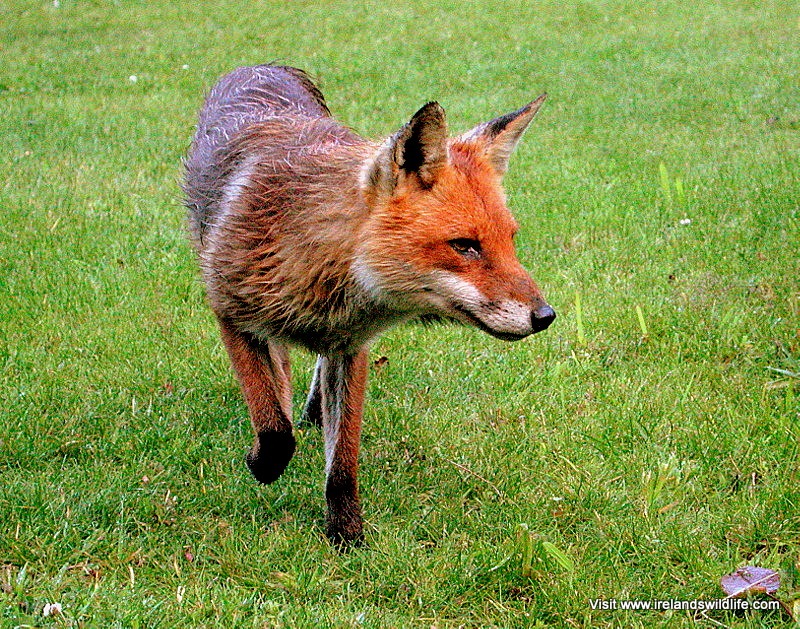 The silence of Sunday morning was shattered by the harsh warning call of a pair of Magpies in the back garden. Despite the lingering affects of last night’s wine I decided it was worth the effort of drawing the curtains as this warning call often indicates a predator is about.

As I peered through the lifting mist I spotted a shabby looking fox that was eating the remains of dinner and I recognized her as a vixen (female fox). She must have been desperate for food to come this near to people and probably has young cubs in the den. The noise of the opening window alerted her and in her panic to escape she forgot where the gate was and tried in vain to leap the wire fence. For a moment she paused and looked around and spotted the kids tractor. A quick climb and jump and all we saw was a disappearing bushy tail.

Foxes are very clever and adaptable creatures and it is no surprise that they have taken to life in our cities and towns. Food is plentiful, temperatures are a few degrees warmer and many householders leave out tasty treats for them. They can become very tame but should be treated with caution as they are wild animals at heart. While some foxes do reside in large suburban gardens many travel in from the countryside each night in search of food. During the day they will sleep under sheds and long grass and as they are very used to people are not frightened by lawnmowers or playing kids.

When the sun sets they begin to forage. Foxes are omnivores and eat a wide variety of food including rabbits, berries and nuts. A study done by David wall and John Rochford of trinity zoology department in 1995/96 examined the stomach contents of 23 foxes killed by traffic. Surprisingly earthworms and beetles were top of the list, contents of dustbins second and rats and mice last. I wonder if they were still learning their city trade and if their diet is more varied today?. Territory sizes also vary. In mountainous area where prey is widely dispersed they range over 15 square miles but in urban areas this can be as little as 0.1 square miles.

Foxes are member of the dog family and have the same teeth as them. In January the mating season begins and the night air is broken by the unearthly scream of the vixens. The males like dogs bark. Cubs are born in spring and emerge into the world after a month. They remain with their mothers till autumn when they must fend for themselves and try to establish their own breeding range.

Despite the benefits of city living life expectancy for urban foxes is typically lower than their rural cousins: just 18 months compared to two years for those living in the countryside. A myth surrounding foxes is that they catch cats and eat them. If you have every witnessed a fight between a cat and dog and seen the cats claws in action this quickly dispels the notion of an easy meal for the fox. I would be interested to find out how widespread they are in our towns and cities (or the countryside).

If you see a fox on your local patch tell us about it in the comments below, or you can email Albert your sightings and observations via the contact form below.