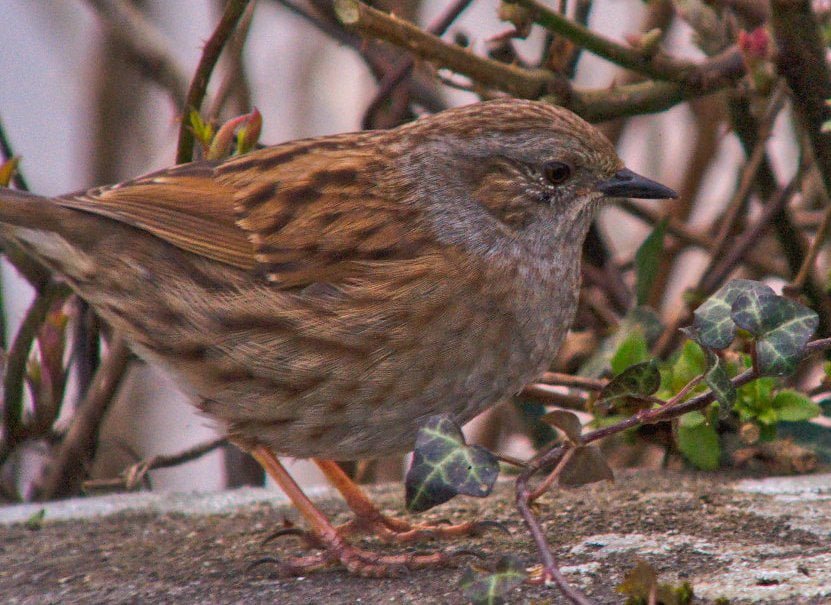 The dunnock is a small brown bird that is a common, if rather shy visitor to many Irish gardens. Still referred to by many by its old name of hedge sparrow, the dunnock isn’t actually related to the sparrows at all. It is the only Irish representative of the accentor family – a group of small ground and scrub dwelling birds that hop around in a characteristically crouched posture.

Although at first glance the dunnock may look like a sparrow it has a much slimmer build, and a much narrower pointed bill. On closer inspection the dunnock is an attractive little bird with its rich brown, black-streaked plumage, its grey head and breast and it’s pinky-orange legs. Adult dunnocks are from 13-14½ cm (5-6 inches) long. Sexes are similar, but females tend to have slightly duller plumage, especially during the breeding season. Young birds resemble adults, but are more brown with bolder streaks of black or dark brown on the plumage that extend to the head and breast. At this stage they are sometimes confused with young robins.

Dunnocks are found all over Ireland and are resident all year round. They are regular visitors to parks and gardens, where they are usually seen on the ground, hopping furtively along, never straying far from available cover. They frequent anywhere with suitable scrub, hedgerows, shrubs or other low-lying cover, where they forage for insects, spiders and other invertebrates. They also eat small seeds, berries and crumbs from the bird table during autumn and winter when invertebrate prey is harder to come by.

Dunnocks have developed a remarkably varied and flexible mating system. Breeding starts in early spring. Males deliver a slightly monotone warbling song that resembles that of the wren, but lacking the smaller bird’s aggressive delivery and distinctive terminal trill. Sometimes a single male and female will mate and co-operate in rearing the young. However, if a male with a particularly good territory may attract and mate with multiple females.

More typically it’s the female that seeks out another mate, as any male she mates with will subsequently help her to care for the young, regardless of which male actually sired them. Where males from adjoining territories have mated with the same female they may merge there territories and co-operate to defend the resulting super-territory.

Four to five bright blue eggs are laid from April to May and are incubated for 12-14 days by the female. Both sexes feed the young which fledge after 12 days. Dunnocks can rear two, and occasionally three broods of young each year.

The dunnock is a popular host species for the cuckoo, and doesn’t seem able to distinguish the cuckoo egg from its own, even though the cuckoo rarely lays blue eggs. Once the young cuckoo hatches it pushes the dunnock eggs or young out of the nest, ensuring that it gets full attention from foster parents that it soon dwarfs.

The Irish dunnock population is estimated at around 810,000 breeding pairs, and while it remains a common and widespread bird figures from the British Trust for Ornithology (BTO) show that dunnock numbers plummeted by nearly 50% in the decade from the mid seventies. Populations have stabilised and even increased slightly since then, but the dunnock is still listed on the Royal Society for the Protection of Birds (RSPB) and the British Trust for Ornithology’s (BTO) amber list of species of moderate conservation concern.