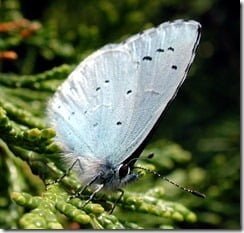 The holly blue is a tiny blue butterfly that has a scattered distribution around Ireland. It is largely confined to the relatively scarce patches of native woodland that still support both holly and ivy. It is also found in urban and suburban gardens or parkland where these plants feature prominently.

This attractive little insect exhibits a pronounced north-south divide when it comes to its life-cycle. From Dublin southwards populations of the holly blue are double brooded, producing two generations in a single summer. Females from the spring brood lay their eggs at the base of the developing flowers and fruits of holly trees, while those of the summer brood lay their eggs in similar locations on ivy. North of Dublin holly blue populations are single-brooded and produce only a single generation in a season. In these single-brooded populations holly is generally the sole food plant for caterpillars.

Adult holly blues are on the wing from April to June throughout their range, and again from August to September in areas where the butterfly is double-brooded. With a wingspan of only 26-35 mm (c. 1-1½ inches) the holly blue is one of our more diminutive butterfly species, but none the less beautiful for its small size. The main colouring of the upper wings is a pale, almost translucent blue with a slightly lilac tinge. Males have a narrow black band on the margin of the forewings, while females have generally darker forewings and a much broader black margin. The undersides of the wings in both sexes are a very pale silvery blue that appears almost white with distinctive black flecks. It has a pale blue body covered with long hairs, long black antennae with white stripes along their length and pale blue legs ringed with black stripes.

Adults feed on the nectar from flowers of both holly and ivy, oozing sap, aphid honeydew and carrion juices. They are most likely to be seen sunning themselves high up near the tops of holly and ivy bushes. In flight they often appear silvery white rather than blue as their wings catch and reflect the sunlight. It’s only when they land and you get a closer look that their splendid blue colouring becomes obvious.

Holly blue caterpillars are small and squat. Although colour variation does occur the caterpillars are generally a pale green colour, sometimes with light purplish lines running the length of the body, and they have a shiny black retractable head. When fully grown they are only about 16mm (0.6 inch) long.

After about 26 days feeding on the developing flowers and fruits of their food plants the caterpillars turn a dull purple colour and prepare to pupate. For double-brooded populations the chrysalis phase of the spring generation lasts about 10-18 days, after which the adult butterflies will emerge and mate to produce the summer brood of eggs. The summer generation, and single-brooded populations, over winter in the chrysalis phase of the life-cycle, and will lie dormant for six months or more before emerging as adults the following spring.

As with many of our smaller wildlife species urban and suburban gardens and parks are providing an increasingly important supplemental habitat for the holly blue. By simply adopting a wildlife friendly approach to gardening and by planting native plant species in the garden (including holly and ivy) we can help the holly blue… and do our bit to preserve Ireland’s wonderful natural heritage for generations to come.