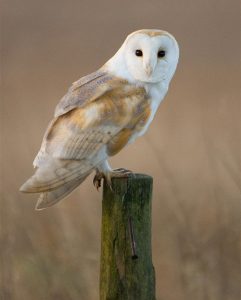 I was out for a routine tramp around the patch about a month ago when something dropped out of a big clump of ivy in the top of a hawthorn tree. It hit the ground with a thud and, curiosity piqued, I headed over to investigate.

As I approached the tree a rustling in the ivy caused me to look up. I was fully expecting to see a woodpigeon. When ivy rustles there’s generally a 99% chance that it’s a wood pigeon. I certainly wasn’t expecting what emerged. An adult barn owl dropped out of the ivy onto a branch less than ten feet away. It was the most perfect creature… not a feather out of place… immaculate in every way. Eyeball to eyeball with the bird, an instant stretched into what seemed an eternity.

Lost in the moment, I forgot all about the camera hanging by my side. I missed one of the best wildlife photo opportunities of my life — but I won’t need a photograph to remember every detail of that encounter. It’s indelibly etched in my memory.

Then, as suddenly as it began it was over. The owl took off on silent wings, floated soundlessly over a nearby hedge, and was gone. I stood for a minute, stunned, trying to digest what I’d just witnessed.

I’d only ever seen two other barn owls in Ireland — the first a classic view of an owl caught in the glare of the car headlights: a ghostly silhouette against the dark sky; the second hunting at dusk, quartering the rough scrub at the base of some local forestry. I never thought I’d get this close to a wild Irish barn owl.

Coming to my senses I went to investigate under the tree. The ground was littered with barn owl pellets. Like other birds of prey barn owls regurgitate the indigestible fur and bones of the animals they eat as neatly compacted pellets. I counted more than thirty of them under the tree in all. It seemed I’d found a regular roost site. I took a few pellets home for a closer look. This owl had been dining on what from the bones looked like pygmy shrews, wood mice and bank voles.

The barn owls is a Red-listed Bird of Conservation Concern in Ireland. It’s population has plummeted by more than 50% over the last 25 years. The reason for the decline is complex and isn’t fully understood, but it has been linked to a combination of factors including a reduction in suitable hunting habitat and their small rodent prey due to more intensive farming methods, secondary poisoning through the increased use of potent rodenticide, and a decrease in suitable nesting sites.

So barn owls are becoming an increasingly scarce bird in Ireland, and needless to say I was delighted to find one frequenting my local patch. The burning question I had now was whether this bird was alone… just passing through… or whether it was resident and part of a breeding pair.

Despite watching from a distance at dusk a number of times I never managed to spot the owl leaving the tree, and never saw barn owls hunting on the nearby rough grassland. I began to think my initial sighting was a one off. In true CSI fashion I decided to conduct an experiment to determine if the owl was still around. I removed all the pellets from under the tree.

A few weeks later I returned, and immediately noticed lots of fresh pellets: the tree had been used, and used regularly, since I’d been there last. Result!

Then, to my surprise, not one but two barn owls emerged from the Ivy, gliding silently across the field and out of sight. My hunch is that I’d stumbled across a breeding pair that are nesting nearby, and that the tree is a handy daytime roost. They’re certainly not nesting in the tree itself, which isn’t suitable, but are probably in an old farm building somewhere locally. Try as I might though I can’t think of a suitable building within striking distance.

Barn owls are amazing birds, and I feel tremendously privileged to have a pair nesting nearby. I wish them well, and look forward to seeing more of them now that I know they’re around.

Some rights reserved by Portable Portraits