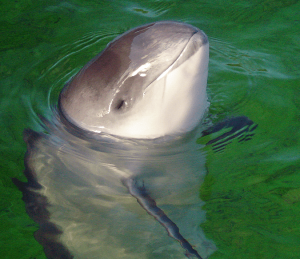 Reaching a maximum length of around 1.9 metres, the diminutive harbour porpoise (also known as the common porpoise) is Ireland’s smallest cetacean species and our only species of porpoise. Found right around the Irish coastline, it is one of the most widely distributed cetaceans (whales and dolphins) in the northern hemisphere.

Average sizes are smaller, with adults rarely exceed 1.5 metres in length. Unusually for cetaceans female harbour porpoises tend to be a little larger than males. It is primarily an inshore species, rarely straying too far from shallow coastal waters (to a maximum depth of between 150-200 metres).

The harbour porpoise looks very much like a small dolphin at first glance, but has a proportionally more rotund body that tapers markedly towards the tail stock. Its head ends in a rather blunt, rounded snout with no obvious “beak”. It is dark grey or grey-brown on its upper surface — looking almost black as its back breaks the water’s surface, with lighter grey flanks fading to a white underside. The dorsal fin is short, wide and triangular and is located around half-way down the back.

Harbour porpoises are usually seen singly, in pairs or in small groups of less than 10 individuals. Larger aggregations are uncommon, but there are occasional reports of 20-30 animals feeding together when they encounter a particularly abundant food source.

Less “showy” than their dolphin cousins porpoises can be quite difficult to see. They typically surface briefly 3 to 4 times in succession to breathe, showing only a quick roll of their dark back and short triangular dorsal fin before disappearing beneath the waves again. They then stay underwater for an extended period (usually 2-6 minutes) before repeating the breathing sequence again. Diving gannets and other feeding seabirds can indicate the presence of foraging cetaceans, so it’s always worth checking underneath diving birds for the tell-tale roll of porpoise backs.

While they can be difficult to spot, you can sometimes hear the “sneeze”-like blow as harbour porpoises surface on a calm day. It’s a trait that earned them their old English name of “Puffing Pig”, and perhaps contributed to their Irish name of “Muc Mhara”, sea pig.

Harbour porpoises have a mixed diet of small fish including herring, mackerel, sprat, pollack, hake and sand eels. They also eats squid and octopus. While they can live for up to 24 years, their average life expectancy is around 14-15 years.

Female harbour porpoises reach sexual maturity at 3-4 years of age. After a gestation period of around 11 months, calves are typically born from May to August with a strong peak around June. At birth calves are from 70-90cm long and weigh from 6.5-10kg. Females generally give birth every 2 years and nurse their calves for around 8 months. 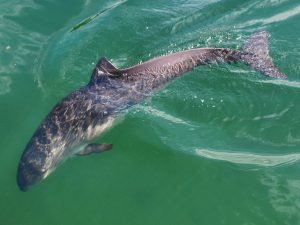 Harbour porpoises are widely distributed in the northern hemisphere. They are currently considered abundant throughout their range and are classed as a species of Least Concern (LC) globally by the International Union for Conservation of Nature (IUCN). However, local population declines have been reported in several areas of the species’ range with the main threats coming from entanglement and bycatch in commercial fishing gear. Disturbance from marine traffic — particularly high volumes of small pleasure craft like jet skis and speedboats — and marine pollution can also have a detrimental impact on local porpoise numbers.

In Ireland the harbour porpoise is protected under the Wildlife Act, and is listed under Annex II of the EU Habitats Directive. Ireland is required under EU law to designate Special Areas of Conservation that meet the requirements of the species. The Irish Whale and Dolphin Group has proposed Dublin Bay, Co. Dublin; Roaringwater Bay, Co. Cork; The Blaskett Islands,Co. Kerry and Galway Bay, Co. Galway as potentially suitable areas.