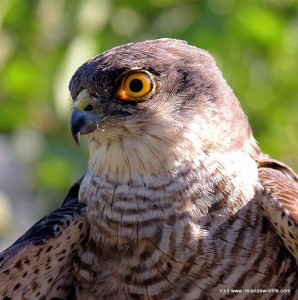 Fast and agile, the sparrowhawk is a supremely capable aerial predator. This fierce-looking bird is one of our most common and widespread raptors, and is found throughout the country. However its shy and secretive nature means that it often goes undetected.

Sparrowhawks are medium-sized birds, with a body length of between 28 and 30 centimetres (11 and 15 inches), a wingspan of 60-75 centimetres (24-30 inches) and weighing 100-300 grams (3.5-10.6 ounces). Female sparrowhawks are much bigger than males, and can weigh up to twice as much. Male sparrowhawks have blue-grey upper parts and a rufous barring pattern on their white underside. Females are browner in colour and have darker barring underneath.

Sparrowhawks have short, broad wings that sometimes look as if they are not fully extended in flight. The wings are rounded rather than pointed like the kestrels, and along with the long tail make this hawk extremely manoeuvrable. Sparrowhawks can duck in and out of cover with ease and weave their way through heavily wooded areas at high speed. When they are out in the open these hawks have a characteristic flap-flap-flap-glide flight pattern that, together with their distinctive profile, makes them relatively easy to distinguish from other birds of prey on the wing. They never hover like kestrels.

When seen on the ground at close quarters, often with a kill, the sparrowhawk looks every bit the predator. The savagely hooked bill, bright yellow eye-rings and permanent scowl afforded by the bold white eye-stripes combine to give the bird a menacing countenance that belies its relatively small size.

A sparrowhawk’s diet consists of a wide range of birds along with the occasional small mammal should the opportunity present itself. They tend to take whatever prey is numerous and easy to catch. The larger female will kill birds up to the size of a wood-pigeon, while the smaller male seldom takes anything larger than a mistle thrush.

Sparrowhawk’s are not built for endurance, and must be able to approach their prey undetected to have any chance of success. Once seen, a sparrowhawk has only seconds to make the kill before its chosen quarry escapes and its alarm calls alert every other bird in the area to the hawk’s presence. Only about one in every ten attacks results in a meal.

Once they have singled out their prey sparrowhawks can be relentless, even reckless in its pursuit. They hurtle headlong into thick cover after the smaller bird, and can injure themselves in the process. Occasionally sparrowhawks knock themselves senseless by flying full-tilt into windows.

Sparrowhawks build their nests in woodland or small clumps of trees from April to May. Eggs are laid from April to June and just as birds like the blue-tit time their breeding to coincide with the maximum abundance of caterpillars, so sparrowhawks time their breeding to ensure the maximum availability of fledgling birds for their young. In summer about 40% of the sparrowhawk’s diet is fledglings.

The female lays 3-6 eggs from April to June and incubates them for 39-42 days. Young sparrowhawks fledge after 24-32 days, but won’t be completely independent until several weeks after leaving the nest.

The widespread use of organochlorine pesticides like DDT during the mid twentieth century had a devastating effect on sparrowhawk populations. Like other birds of prey the sparrowhawk accumulated toxic chemicals by feeding on prey that had eaten contaminated grain. Luckily sparrowhawk populations have recovered and the Irish breeding population is estimated to be around 11,000 pairs.