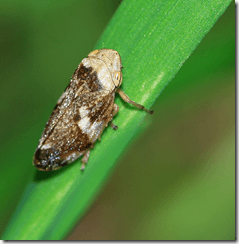 Have you ever wondered what makes those little balls of froth, popularly known as “cuckoo spit”, that you find on plant stems during the summer? Blow gently on the froth and you’ll find your answer. Inside the frothy mass you’ll find one or more yellow-green insect nymphs – the young of the common frog hopper, also known as the cuckoo spit bug or spittle bug.

The common frog hopper is a remarkable little insect that’s common all over Ireland. Recent research showed that that this unassuming creature, which only reaches 6-8 mm (c. 0.25 inch) in length, can catapult itself up to 70cm (c. 28 inches) into the air – a statistic that makes it a true champion among natures jumping fraternity. Although the flea achieves a similar height, the frog hopper, at around 12 milligrams (0.0004 oz), is up to 60 times heavier than the average flea, making its jumping performance that much more impressive.

In common with other bugs (Hemiptera) frog hoppers have specially adapted mouth parts that allow them to suck the sap from the stems of living plants. At rest they hold their wings tent-like over their body. Adult frog hoppers vary enormously in colour. Most tend to be a pale mottled brown, but they can also be yellow, green, almost black, striped, dark brown – even purple!

Like most other bugs frog hoppers mate back to back, and adults can sometimes be seen locked together in such a manner. They follow a pattern of insect development known as “hemimetabolous development” – which means there are no larval stages and metamorphoses as with many other insects. Instead frog hoppers develop through a series of wingless nymph stages that largely resemble adult insects. The nymphs produce the protective cocoon of froth by blowing air through a fluid excreted from their anus. This protective layer of froth not only conceals them from predators, but also protects them from the potentially fatal drying effects of the sun and wind.

The secret to the frog hoppers record breaking jump is its back pair of legs. These are extremely specialised, and are used exclusively for jumping. They are so well developed that they are no use at all for walking, and simply trail behind the insect’s body as it moves around. When employed for jumping, however, these back legs form the centrepiece of an incredibly powerful catapult system. The legs are folded in a cocked position, held in place by special ridges. Two huge muscles (one for each leg) are then contracted building up tremendous force until the legs finally break free. All of the pent-up force is released instantaneously, propelling the insect at an incredible velocity.

Anyone who’s seen a frog-hopper jump will attest to this speed. One moment the insect is there, the next it’s gone. In fact the velocity generated during the early stages of a frog-hopper jump generates a staggering G-force of over 400. That’s a pretty impressive statistic when you consider that an astronaut rocketing into orbit around the earth experiences no more than a paltry 5 Gs.