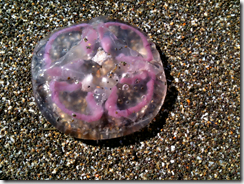 This widespread jellyfish species is found in the Atlantic, Indian and Pacific oceans across a variety of climate zones. Optimum water temperature for the species is between 9 and 19 degrees Celsius, but it can tolerate a much wider temperature range from -6 degrees Celsius to as high as 31 degrees Celsius. Also known as the moon jelly and saucer jelly, this is the most common species of jellyfish in Irish waters. It mainly occurs near the coast, sometimes in massive numbers, and occasionally washes up on beaches.

The adult jellyfish consists of a translucent disc or saucer that is normally up to 250mm (10 inches) across, but which can reach a diameter of up to 400mm (16 inches). A variety of colourful body parts are visible through the disc, including four very prominent circular gonads arranged around the centre – these are typically mauve, violet, reddish, pink or yellowish in colour.

The disc itself is relatively thick at the centre, thinning markedly towards the outer edge, and is fringed by a ring of relatively short, hollow tentacles at the margins. These tentacles are used as a filtration net to snare small prey animals, and are armed with stinging cells called nematocysts. The four oral “arms”, that radiate from the mouth out towards the disc margins along the animal’s underside also carry a payload of stinging cells.

Although the common jellyfish can swim by pulsating its disc, the action is more a mechanism for keeping the animal near the surface than it is a form of active propulsion. Like other jellyfish, it drifts with the current, feeding on zooplankton (mainly small invertebrates like molluscs, crustaceans, copepods, rotifers, nematodes, larvae, protozoans, diatoms, eggs, fish eggs, and small jellyfish).

Prey typically becomes trapped in a sticky mucous that coats both the disc and the tentacles, and is moved slowly towards the disc margin by the beating of tiny hair like structures called cilia. The string of food-laden mucous is collected by the oral “arms” and transported to the animal’s mouth where it is ingested. Occasionally the jellyfish will encounter larger prey, such as small fish, which it will incapacitate using its stinging cells before transporting it to the mouth.

Reproduction normally takes place in the spring and summer. The sexes are separate, and during mating sperm from the male is passed through the female’s mouth to fertilise the eggs internally. These fertilised eggs are then moved to special brood pouches in the oral “arms”, where they develop before being releases as free swimming larvae (planulae larvae) in the Autumn. After a brief swimming period the planulae larvae settle onto the substrate and become tiny sessile (non-moving) animals known scyphistomae. These multiply through asexual budding, releaseing tiny, free swimming immature jellyfish called ephyrae. The ephyrae feed on plankton and usually mature at around 3 months, although it can take up to two years for them to become sexually mature adult jellyfish.

In some parts of the world (notably China, The Philippines and South-east Asia) people regularly eat common jellyfish.