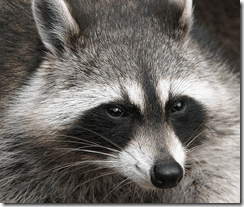 A report in today’s Irish times reveals that state wildlife authorities have issued an invasive species alert after a raccoon was spotted in a garden in Balyvourney in County Cork on Easter Monday.

In a flurry of what can only be described as “over-enthusiastic” reporting the article cites that Raccoons, which are a native North American species “spread rabies and also carry a roundworm (Baylisascaris procyonis ) which can be lethal to humans”.

While that may be true of wild North American raccoons, it is very improbably that an escaped exotic pet (which is the most likely explanation for the Co. Cork raccoon sighting) would be carrying either pathogen.

According to the Irish Times The National Biodiversity Data Centre last night expressed “significant concern” about the creature’s “potential to introduce new parasites and diseases that may affect human health and native species”.

While the introduction of any invasive species is bad news to local ecosystems, and a viable feral raccoon population in Ireland could have a devastating impact on local wildlife, a little perspective is called for in reporting such instances.

Raccoons have established themselves in parts of mainland Europe where they were originally introduced in relatively large numbers for fur farming in the 20th century. As with the mink in Ireland, enough of these captives escaped, and/or were released intentionally into the wild to establish viable self-sustaining feral populations.

The situation in Ireland is very different. Raccoons have never been kept here in large numbers… and the individual seen in Ballyvourney is almost certainly an escaped exotic pet. A lone individual is highly unlikely to cause significant damage to the local ecosystem, and has absolutely no potential of establishing a sustainable feral population.